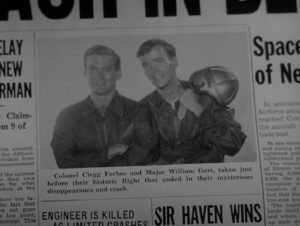 inexplicable problem occurs: Forbes claims to remember a fellow passenger named Ed Harrington (Charles Aidman), who, much to the colonel’s chagrin, seems to have been completely erased from existence.

An unsettling episode, “And When the Sky Was Opened” benefits from Rod Taylor’s compelling performance as a professional astronaut who gradually transitions into a nervous wreck when faced with circumstances beyond his ability to explain. Though Rod Serling’s premise might have been more appropriately suited for a typical installment of The Outer Limits, fans of The Twilight Zone are nonetheless advised to view this entry for its remarkable commentary on the human condition. 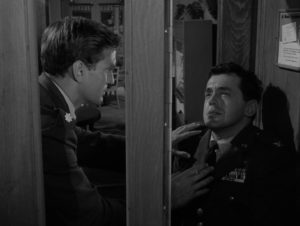 Col. Forbes initially exemplifies the leadership qualities that one would expect of a commanding officer, thus giving audiences sufficient reason to accept that such an individual would no doubt remain level-headed under the most extraordinary pressures imaginable. Therefore, when later scenes detail the slow unraveling of Forbes’ exceptional mental state, viewers of a sensitive inclination will surely sympathize with the protagonist upon realizing the enormity of his predicament. Contributing to the credibility of Forbes’ breakdown is Taylor himself, whose restrained portrayal of the central character prevents him from coming across as a raving lunatic even during his most paranoid of reactions. 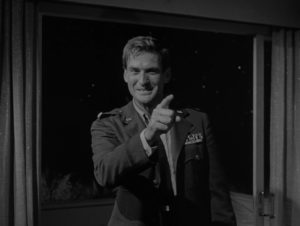 Additionally unnerving is the air of ambiguity that remains present from start to finish, which, in contrast to many episodes of The Twilight Zone, is never explained through a shock ending or other such means. By deliberately failing to expose the mystery that permeates his narrative, Serling effectively manipulated the minds of his audience without resorting to an outcome that would frustrate those hoping for a more definitive resolution. 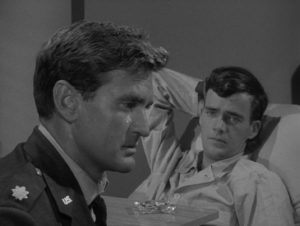 Given the fantastic nature of his circumstances, Col. Forbes demonstrates how human beings can so willingly handle a tremendous level of stress, assuming that any challenges remain within the confines of what many would consider to be “normal” relative to the human experience. Specifically, one can surmise that Forbes would have gladly surrendered his life in the fulfillment of his mission; however, as soon as the fabric of reality begins to unfold before his very eyes, this otherwise noble individual regresses into a decidedly primal state of fear and self-preservation.

A fascinating study on human responses to unknown phenomena, “And When the Sky Was Opened” will appeal to those who appreciate The Twilight Zone for its insightful subject matter. Also worth mentioning is the fact that this episode alludes to concepts of alternate universes and interdimensional travel, which serve as a testament to Serling’s pioneer contributions to the science fiction genre.

This review is dedicated to Rod Taylor, who passed away last week at the age of 84.

One thought on “The Twilight Zone Episode 11: And When the Sky Was Opened”