A kindly old street peddler known as Pedott (Ernest Truex) displays a remarkable talent for knowing exactly what people will need and when they will need it. Hoping to take advantage

of Pedott’s gift, a miserable, down-on-his-luck former baseball player named Fred Renard (Steve Cochran) demands that he be given what he “needs.” Pedott eventually obliges Fred, but not to the satisfaction of his ever entitled customer.

Though marred by a mean-spirited ending, “What You Need” benefits from a simple but effective moral lesson. Specifically, this episode warns against learned helplessness in a manner befitting The Twilight Zone

Unlikable from the onset, Fred comes across as a man who blames the world for all his woes yet never acknowledges the lack of initiative that prevents him from leading a successful life.

Complementing Steve Cochran’s realistic portrayal of a perpetual loser with a chip on his shoulder, Ernest Truex exemplified the attributes of a humble servant who makes the best of his meager circumstances by sharing his uncanny knack for prediction with those in need; however, the generosity and benevolent qualities of this character are put to the test when confronted with the relentless bullying of a psychotic thug, who continues to antagonize Pedott even after being afforded a second chance at life.

In contrast to the Tales of Tomorrow 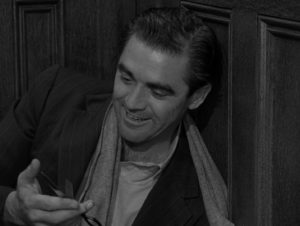 his astonishing foresight in the first place. Surprisingly, such ambiguity enhances any mystery surrounding the Pedott character and thereby leaves open the possibility of supernatural intervention as Serling’s twist ending would seem to imply.

“What You Need” makes adequate use of an intriguing premise. That being said, Serling seemed unable to resolve his narrative conflict in a satisfactory fashion as evidenced by the excessively cruel fate that befalls Fred Renard. While one may 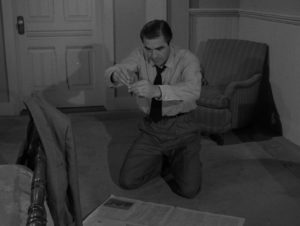 argue that Fred deserved some form of punishment for his atrocious behavior, death via automobile collision can hardly be considered a just outcome (Pedott later reveals that he would have been killed by Fred had he not acted as he did; nevertheless, this explanation makes little sense given that such a crime would work against Fred’s own interests). Additionally peculiar is the callous reaction that Pedott exhibits toward Fred’s demise, which potentially undermines the good-hearted nature of his character.

Despite suffering from an incongruous conclusion, “What You Need” should be commended for emphasizing the importance of actively working to attain success instead of relying on the generosity of others in order to advance in life. Had Fred realized that Pedott’s advice contained greater value than material possessions ever could, perhaps he would have enjoyed a more prosperous existence as a result.

“What You Need” lacks a powerful twist ending to accompany its phenomenal supporting narrative. Fans of The Twilight Zone

are nonetheless advised to view this episode for its poignant, if occasionally muddled, life lesson regarding the dangers of turning oneself into a professional victim.

One thought on “The Twilight Zone Episode 12: What You Need”