Fearing that a nuclear war may be imminent, hydrogen specialist William Sturka (Fritz Weaver) and his friend Jerry Riden (Joe Maross) decide to escape from the planet. Despite making plans in advance, both men and their families run into trouble when confronted by a nosy security guard named Carling (Edward Andrews).

By combining clever social commentary with a riveting suspense narrative, “Third from the Sun” makes for a classic episode of The Twilight Zone. Likewise, a brilliant twist ending serves as a testament to Rod Serling’s ability to entirely skew the perception of his audience.

Fritz Weaver played Sturka as if deeply troubled by the potential devastation facing his home world, thus allowing viewers to invest in an otherwise generic doomsday scenario (of course,

this also has the effect of distracting audiences from any cues that might give away the final reveal prematurely). Sturka’s desperation in later scenes is further accentuated by the undermining efforts of a bothersome coworker, who also benefits from a captivating performance by Edward Andrews. Notably, Carling’s discovery of Sturka’s escape plan followed by his subsequent efforts to foil said plan only enhance the uncertainty aspects of Serling’s narrative, leading to a perfect balance of human and disaster-themed conflict.

None, with the exception of several minor scientific inaccuracies. 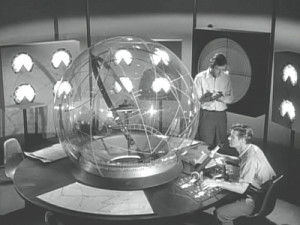 , “Third from the Sun” offers a penetrating commentary on the Cold War themes that permeated the majority of science fiction produced during the mid-20th century. Specifically, this episode includes another instance in which Serling decided to manipulate society’s fear of a nuclear holocaust that would have likely ensued had mutual assured destruction failed to deter such an outcome. While the context for a premise as described above may fail to evoke strong emotions from a post-Cold War generation, those who appreciate Serling’s resonating critique of human nature may enjoy this episode regardless of its archaic subject matter.

An outstanding episode, “Third from the Sun” provides a harrowing reflection of mankind’s desire to flee from the chaos that characterized the era in which it (presumably) takes place. Also remarkable is the fact that Serling effectively utilized science fiction as a vehicle for social commentary, indicating that his talents as a writer extended far beyond the unusual or macabre themes that defined much of his career.

2 thoughts on “The Twilight Zone Episode 14: Third from the Sun”