After crash landing, astronauts Donlin (Edward Binns), Pierson (Ted Otis), and Corey (Dewey Martin) believe themselves to be stranded on a desolate asteroid. With resources dwindling and 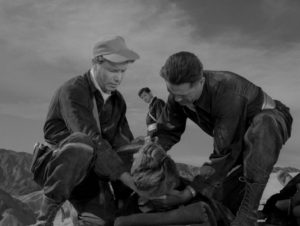 no means of contacting mission control, Corey is forced to choose between dying with dignity and surrendering his principles in order to survive.

offering, “I Shot an Arrow into the Air” sheds light upon the raw brutality of which humans are capable when threatened with annihilation. Its illogical premise notwithstanding, this episode benefits from a creative twist ending similar to another one of Rod Serling’s remarkable contributions to the science fiction genre.

By taking place in a desert, “I Shot an Arrow into the Air” allows the audience to empathize with each main character and his sense of isolation. With nothing to accompany the protagonists 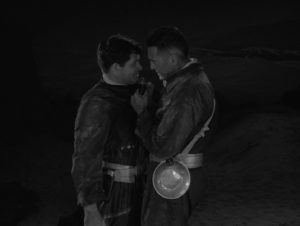 save for dust, mountains, and other dreary surroundings for miles on end, one can easily understand why a person in this situation would become so quickly unhinged.

Also noteworthy is Edward Binns’ portrayal of Col. Bob Donlin, who, as an archetypal military leader, remains level-headed even when faced with the hopeless nature of his circumstances. Donlin’s unwillingness to compromise provides the group with a reason to maintain their moral grounding despite the certain death that awaits them; however, the colonel’s foolish manner of dealing with Corey may cast doubt on the competency of this otherwise commendable officer.

Regardless of its laudable intentions, this episode is marred by one substantial flaw in characterization: Corey is intended to serve as an example of how human instincts can transform 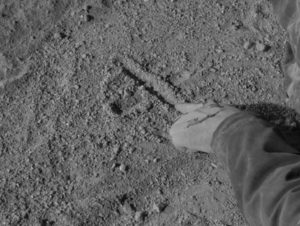 even the most noble of men into cruel savages, yet no such transition ever takes place. Instead, Corey immediately reveals the selfish, callous attributes that one would expect of an uncivilized fiend, thus indicating that murder, theft, and deceit were always natural to him. In addition to undermining Serling’s above thesis, the inherent flaws in Corey’s personality also raise questions as to how someone with such an incorrigible disposition could have been chosen for a spaceflight mission in the first place. 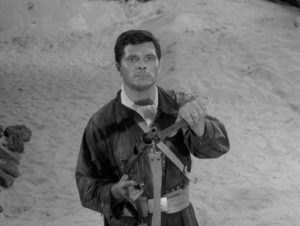 Though hampered by improper character development, “I Shot an Arrow into the Air” should nonetheless be commended for challenging the notion that human beings would remain altruistic and strong-willed during a life-or-death crisis. While certain exceptional individuals might retain the unfaltering dedication to selfless pursuits exemplified by Donlin, the sad truth of the matter is that most people would, in all likelihood, behave in a similar fashion as Corey if food and water were removed from their lives.

“I Shot an Arrow into the Air” requires its viewers to confront a rather uncomfortable fact concerning the human condition. Also worth praising is Serling’s conclusion, which will no doubt remind perceptive viewers of more iconic twist ending involving the Statue of Liberty and a society governed by intelligent simians.

2 thoughts on “The Twilight Zone Episode 15: I Shot an Arrow into the Air”