While residing on Priplanus, an unscrupulous merchant known as the Space Trader (Torin Thatcher) generates a storm to destroy the Robinsons’ hydroponic garden. 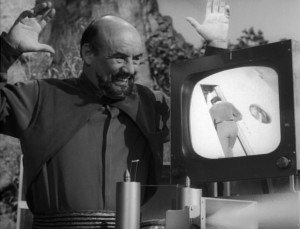 Unwilling to survive on protein pills alone, Dr. Smith exchanges the Robot for a twelve-day supply of food—a decision that alienates him from the Robinsons and Major West. Desperate to make amends with Will, Dr. Smith succeeds in retrieving the Robot—at a terrible cost.

Centering on Dr. Smith’s dealings with a crooked, eccentric alien (later a common trope in this series), “The Space Trader” may appeal to fans of campy, child-friendly Lost in Space episodes. Science fiction buffs, in contrast, may find little value in the antics of Dr. Smith and the Space Trader—two flamboyant and cartoonish characters. 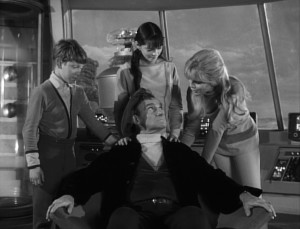 Discovering a container of food in the Jupiter 2, the Robinsons determine the truth about Dr. Smith and his agreement with the Space Trader. Unable to endure the resulting silent treatment from Will, Dr. Smith returns to the Space Trader and purchases the Robot from him—a mildly heartwarming and redemptive gesture from Dr. Smith, whose earlier actions border on the despicable.

Despite establishing a realistic and compelling conflict in the opening sequence, “The Space Trader” fails to sustain an air of credibility for one reason: 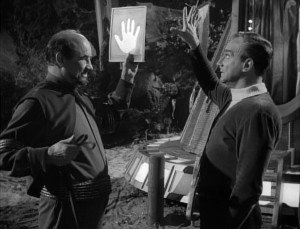 when confronted with a potentially life-threatening food shortage, the Robinsons and Major West respond with humor, nonchalance, and unfettered optimism. Though a testament to the positive outlook of each character (with the obvious exception of Dr. Smith), the cheerful attitudes of the Robinson family may prevent the audience from accepting, let alone sympathizing with, the dire circumstances that plague the entire group throughout this episode.

Even when tempted by the Space Trader, the Robinsons refuse to barter the Robot for food. Viewers will thus infer that Will and his family value the Robot just as they would a flesh-and-blood crew member—a sentiment that, having been implied for the first time in “War of the Robots,” would define the Robot’s relationship with his human companions for many years to come.

“The Space Trader” is a juvenile, mediocre installment of Lost in Space. Those of a sensitive nature may, however, appreciate this episode for emphasizing the Robot’s important place among his “family.”

One thought on “Lost in Space Episode 23: The Space Trader”