Accused of committing criminal acts in outer space, the Robinsons and Major West are teleported to another planet and forced to testify before an alien jury. 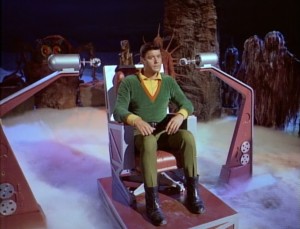 Upon further investigation, Judge Iko of the Galactic Tribunal discovers the true culprit of the crimes in question.

By paying homage to “The Derelict” and “The Reluctant Stowaway” from season one, “The Prisoners of Space” will appeal to fans of the early Lost in Space episodes. Especially worth praising are the alien court sequences, which center on Dr. Smith’s sabotage of the Jupiter 2. 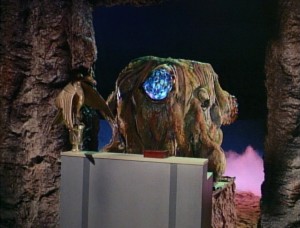 Throughout the trial, an ominous fog effect is used to enhance the spooky, mysterious nature of the alien creatures lurking in the background—a terrifying display that works to heighten, if only on a subconscious level, the apprehension that viewers may experience upon watching Will, Major West, and Professor Robinson defend themselves against accusations of a heinous variety.

In contrast to the bubble creatures of “The Derelict,” Judge Iko employs vocal sounds rather than electrical impulses when communicating with humans—a 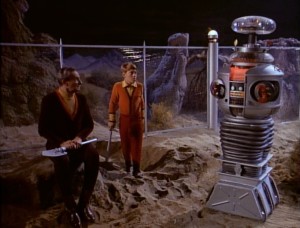 Fearing that Dr. Smith will incriminate himself if required to testify for the Galactic Tribunal, Will and the Robot assist the reluctant saboteur in carrying out his escape plan. In doing so, however, both characters endanger the welfare of the entire Robinson family—now falsely accused as a result of Dr. Smith’s conduct. 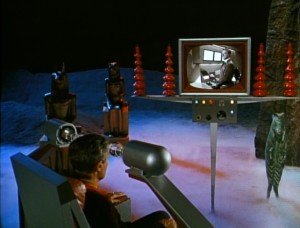 In the penultimate scene, the Robinsons sign a petition to spare Dr. Smith the punishment that he deserves—a resolution that, though anticlimactic, serves as a testament to the kind and forgiving qualities of the Robinson family.

“The Prisoners of Space” is a haunting, atmospheric episode of Lost in Space. Fans of the sci-fi/horror crossover genre may therefore enjoy this entry, which contains an assortment of grotesque alien monsters.

2 thoughts on “Lost in Space Episode 35: The Prisoners of Space”