While play-acting with Will and Penny, Dr. Smith acquires the hammer and gauntlets of Thor (Bern Hoffman). Teleported to Asgard by the valkyrie Brynhilda 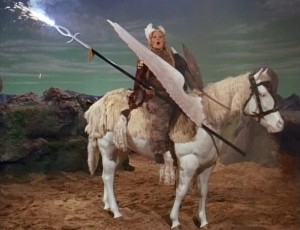 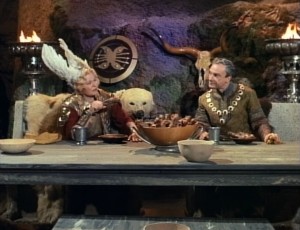 This offering deserves praise for its elegant and majestic set designs, which establish a fitting atmosphere for the Norse god of thunder and his valkyrie wife. (The Styrofoam rocks and cheesy props featured in the Asgard sequences do, however, detract from the captivating aesthetics of Thor’s lair.)

Substituting sponges for stones, Dr. Smith appears to squeeze water from a solid rock—a clever deception that serves to undermine Thor on a psychological level. 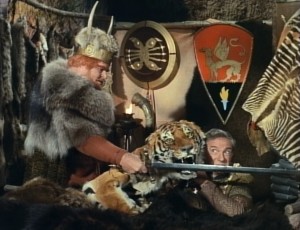 Successful in his efforts to emasculate the mighty god, Dr. Smith listens with eager ears while Thor, now reduced to a blubbering and incoherent mess, admits to being a fake warrior and attributes his insecurities to an unhappy childhood which, according to a follow-up confession, never even happened in the first place—a pathetic and disgraceful mockery of the most iconic, legendary figure in all of Norse mythology. 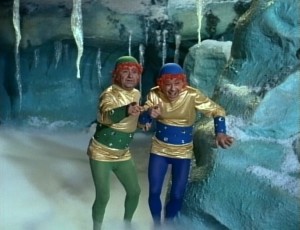 “The Space Vikings” raises the possibility that powerful aliens could have influenced many of the ancient legends on Earth—a fascinating, rarely explored concept in the science fiction genre. That being said, this episode lacks the intelligence and thoughtfulness of “Who Mourns for Adonais?” from Star Trek: The Original Series, which depicts the Greek god Apollo as a complex and semi-realistic figure.

One of the worst episodes of Lost in Space, “The Space Vikings” may evoke criticism for its goofy humor and annoying characters. Especially awful are Dr. Smith’s interactions with Thor, whose portrayal often borders on the absurd.

3 thoughts on “Lost in Space Episode 49: The Space Vikings”