Having escaped from prison, the anti-matter version of Professor Robinson—a cruel, mean-spirited man—assumes the place of his counterpart. When the imposter reveals 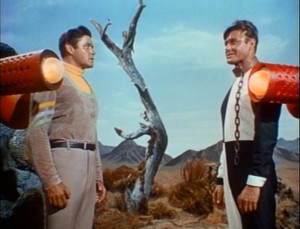 his true identity, Will attempts to free his father from confinement in a mysterious shadow world.

Often considered the greatest episode of Lost in Space, “The Anti-Matter Man” contains a penetrating study on the concept of human duality. Exceptionally terrific is the performance of Guy Williams, the sinister acting of whom offers a startling contrast to the kind, benevolent qualities commonly exhibited by his character.

It should be indicated that the premise for this episode had been explored previously in Star Trek’s “The Enemy Within,” wherein Captain Kirk is divided 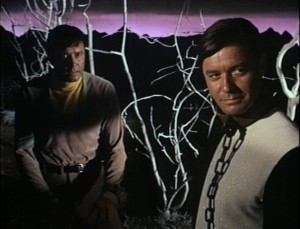 into two halves—one good and the other evil—by a malfunctioning transporter. That being said, “The Anti-Matter Man” provides an arguably superior examination of the same topic, with the gravitas of Williams adding credibility to the notion of an evil John Robinson existing somewhere in the universe—much in contrast to William Shatner’s portrayal of the “bad” Kirk, which could easily be mistaken for a second-rate parody.

Also worth mentioning is that unlike “Follow the Leader” from season one, “The Anti-Matter Man” features an antagonist who—despite being hot-tempered and malicious—retains the core

personality of Professor Robinson, thereby establishing himself as a dark but realistic version of a character whom audiences know and love. For example, the imposter never contemplates eliminating Will when doing so would prove advantageous, indicating a compassionate side not once demonstrated by Canto—the evil spirit who possesses John Robinson in the aforementioned “Follow the Leader.”

Another interesting addition to this episode, Major West’s doppelganger (known as “Dron” in the anti-matter universe) appears to lack critical thinking skills and responds angrily when insulted—negative 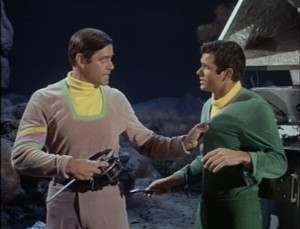 characteristics that also define the “good” Major West. As opposed to his duplicate, however, Dron fails to maintain a trusting and respectful relationship with Professor Robinson, which proves detrimental for him at one point in the narrative.

On a final note, the visual elements that comprise the shadow world should be commended. Specifically, the rocks and trees located on the anti-matter planet are colored a spooky, unnatural shade of white, producing a bleak and nightmarish contrast when displayed against the purple horizon—an atmosphere befitting a world governed by ominous, unpredictable forces.

Upon entering the anti-matter prison, the Robot locates an incarcerated, uncouth copy of himself. Following this introduction, the imprisoned Robot sings an off-key rendition of “Swing Low, Sweet Chariot”—the only campy, distracting moment in an otherwise serious episode.

Though scientifically dubious (matter and anti-matter annihilate upon contacting each other, precluding an encounter between John Robinson and his oppositely charged self), “The Anti-Matter Man” deserves praise for highlighting, if only through a 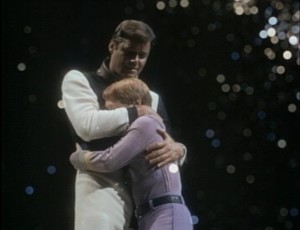 simplified metaphor, the eternal struggle between good and evil as regards the human condition. Note that even for all his savage tendencies, the imposter John Robinson realizes that he cannot destroy his matter-universe counterpart if he wishes to continue existing—a subtle reference to the futility of man’s frequent attempts to deny, suppress, or extinguish one “side” (either good or evil) of himself in favor of embracing the other.

“The Anti-Matter Man” is a classic, thought-provoking episode of Lost in Space. Especially for fans of the father-son dynamic between John and Will Robinson, this installment should be requisite viewing.

9 thoughts on “Lost in Space Episode 74: The Anti-Matter Man”