After Dr. Smith inadvertently assists in the escape of Creech (Michael Conrad)—an apelike convict—and implicates Major West in the process, all three men are 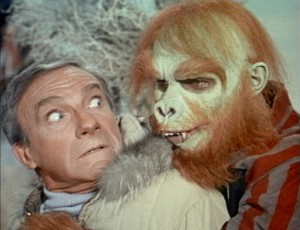 sentenced to a life of hard labor on the prison planet Destructon. While Don appears content to wait for Will and the Robot to appeal his case via the proper legal channels, Dr. Smith—realizing that a fortune in deutronium awaits him just outside the penitentiary—decides to assist Creech with his jailbreak.

“Fugitives in Space” is marred by excessive camp. Fans of Dr. Smith and Major West will, however, enjoy this episode for partially resolving the ongoing conflict between both characters.

By featuring an infernal labor camp setting, a brutal antagonist with simian features, and a prison warden with no regard for justice, “Fugitives in Space” creates an 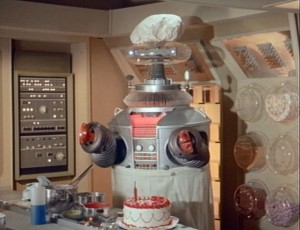 atmosphere of hopelessness and despair around the circumstances of Dr. Smith and Major West—a dark and effective twist on the prison episode trope.

By “sniffing” a prisoner’s uniform to track a man’s scent and later baking an explosive cake while dressed in chef’s whites, the Robot comes across as a goofy ham used only for comic relief purposes—an undignified fate for the most iconic robot in science fiction history.

Providing closure to the longtime feud of Dr. Smith and Major West, “Fugitives in Space” deserves praise for its thoughtful character aspects. In one scene,

for example, Dr. Smith—though tempted with an extravagant reward—refuses to leave behind an unconscious Major West due to concerns over his safety. On another occasion, Major West sets aside his animosity toward Dr. Smith and helps him navigate a field of mines—a touching display that, similar to “The Space Primevals” from earlier in season three, reveals the grudging respect that Dr. Smith and Major West have for each other.

For its cheap costumes and juvenile humor, “Fugitives in Space” may elicit groaning from viewers of a serious nature. Nevertheless, this episode should be commended for its heavy emphasis on loyalty, friendship, and self-sacrifice.

One thought on “Lost in Space Episode 79: Fugitives in Space”