In response to a 200-year-old flight recorder, the Enterprise penetrates a giant barrier residing at the edge of the Milky Way Galaxy. Affected by the barrier, Lieutenant Commander Gary Mitchell (Gary Lockwood)—the ship’s helmsman—and Elizabeth Dehner 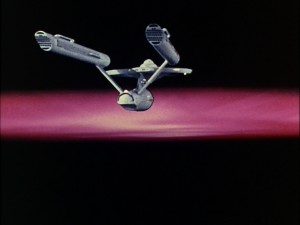 (Sally Kellerman), a psychiatrist with ESP tendencies, develop superhuman powers at an extraordinary rate. Considering himself a deity and therefore unaccountable to the laws of man, Gary leaves Captain Kirk with no choice but to take drastic measures in protection of his crew.

The second Star Trek pilot, “Where No Man Has Gone Before” should be praised for its penetrating commentary on the human condition. Also terrific are the performances of William Shatner and Gary Lockwood, which make compelling the themes of friendship, sacrifice, and betrayal at the heart of this episode.

When Gary passes through the galactic barrier, both of his eyes turn a glossy shade of silver, causing them to resemble giant marbles protruding from his skull—an ominous effect that serves to wipe away any outward trace of human emotion from his character. 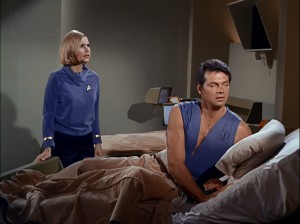 Additionally worth commending is the central conflict of this episode, which forces Kirk to choose between abandoning a friend in peril and risking the safety of his entire crew. On one hand, Kirk tacitly acknowledges the wisdom in Spock’s proposal to eliminate Gary before he reaches an invulnerable state. In spite of this, Kirk waits until the last possible moment to attack Gary, allowing a troubled conscience to supersede his better judgment up to a point. Though quite illogical, as Spock himself indicates, the decisions made by Kirk demonstrate a balance between human compassion and the fortitude of a strong leader—two attributes that would define his captaincy for decades to come.

Observant Star Trek fans will note that certain aspects of “Where No Man Has Gone Before” contradict the canon of future episodes. 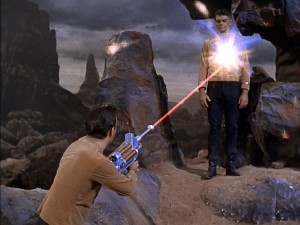 “Where No Man Has Gone Before” contains a fascinating, if not terribly subtle, study on how tremendous power coupled with unbridled ambition can destroy even the noblest of men. For example, Mitchell initially appears to possess all the qualities (i.e., honor, respect, and loyalty) that one would associate with a typical Starfleet officer. Almost immediately after attaining his godlike abilities, however, Mitchell threatens to “squash” his companions, including his captain and former best friend, like the “insects” that he perceives them to be—a sudden but realistic change of personality, which warns of the corrupting influence that power (or even the perception of power, for that matter) can have on the human ego.

“Where No Man Has Gone Before” should be requisite viewing for fans of the original series. Notably, this episode employs science fiction as a vehicle to analyze flawed human nature—a common trope in later Star Trek offerings.