After writing about a serial killer who preys on the homeless, sleazy journalist Dale Sweeney (Steven Weber) is tipped off by a bum named Robert (Vincent Shiavelli). While working to solve 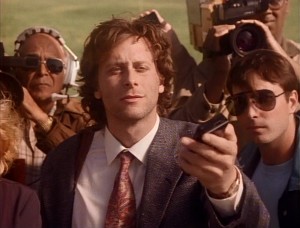 the case, Dale seduces Jess Gilchrist (Rita Wilson) in order to determine her involvement with the Grateful Homeless Outcasts and Unwanteds Layaway Society (or “GHOULS” for short).

By combining atmospheric elements with grisly gore effects, “Mournin’ Mess” will appeal to Tales from the Crypt enthusiasts. Also worth mentioning is Steven Weber’s portrayal of Dale, whose slimy antics will undoubtedly prompt audiences to root for his demise.

As indicated above, Weber should be commended for eliciting contempt toward Dale and thereby allowing viewers to find tremendous satisfaction in any misfortune that befalls him after uncovering the real mission underlying GHOULS (ironically, Robert the homeless man comes across as more sympathetic than Dale, even 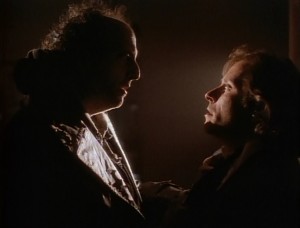 though Vincent Shiavelli’s unnerving physical appearance would suggest otherwise). More time could have been dedicated to establishing a realistic and compelling background for Dale so that his vile behavior would seem less cartoonish at times; nevertheless, Weber’s apparent talent for playing unlikable characters should counterbalance a general absence of personality depth that would support the protagonist’s motivations.

The final twist injects a sizable dose of black humor into an otherwise forgettable installment; however, it should be noted that a campy final sequence tends to clash with the more serious material that precedes it.

In contrast to those Tales from the Crypt

offerings that feature female fortune hunters being punished through gruesome means, “Mournin’ Mess” puts a unique spin on this seemingly tired trope. For the first time, a depraved pickup artist faces severe consequences for past transgressions, thus allowing for a similar concept to be employed in future episodes.

“Mournin’ Mess” benefits from an unpredictable and downright “ghoulish” turn of events. For those who enjoy macabre comedic devices and loads of over-the-top violence, this one will not disappoint.