After an exhausting duty tour, the Enterprise crew takes shore leave on a wondrous planet. Upon arriving, McCoy encounters a giant rabbit and relays his experience to an amused Captain Kirk. Kirk’s attitude quickly changes, however, when an obnoxious prankster named Finnegan (Bruce Mars) inexplicably shows up on the planet

exactly as the captain remembered him from his Academy years.

“Shore Leave” stands out as the first fun, goofy entry in a mostly serious science fiction show. While the writers should be commended for branching out from the somber subject matter that characterized the first fourteen episodes, the amount of fluff contained in Theodore Sturgeon’s script culminates in a somewhat drawn-out narrative.

fans tend to appreciate “Shore Leave” less than other lighthearted episodes such as “The Trouble with Tribbles” and “I, Mudd,” this installment nonetheless serves as a testament to the series producers’ ability to execute amusing material without giving in to the excessive campiness that marred the majority of Lost in Space

storylines. Because Sturgeon remained within acceptable science fiction boundaries when envisioning his fantasy planet, his script allows audiences to become acquainted with the more personal sides of Kirk, McCoy, and Sulu, which wouldn’t have been possible had this episode’s silliness reached Irwin Allen levels.

Unlike the aforementioned tribble episode, “Shore Leave” lacks sufficient substance to fill out an hour’s worth of film. For this reason, many scenes tend to drag on inordinately longer than necessary 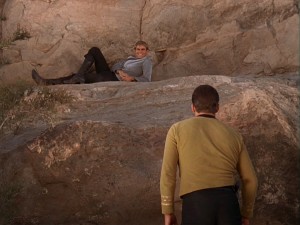 (notably, Kirk’s fist fight with Finnegan becomes a chore to watch after the first few punches are thrown).

Another issue with Robert Sparr’s direction involves the main characters’ reactions to McCoy’s death, which, though temporary, should have affected Kirk and Spock on a deeply personal level. Whereas William Shatner’s brilliant performance in Star Trek II: The Wrath of Khan

should leave fans feeling devastated over Spock’s ultimate sacrifice, Kirk’s near indifference to the loss of McCoy in “Shore Leave” makes it too obvious that the Enterprise doctor will miraculously rejuvenate by the time the credits roll.

Gene Roddenberry’s humanistic philosophy is decidedly absent from this episode, though it’s worth noting that the lack of a profound message fails to hamper the quality of this otherwise enjoyable piece. If anything, “Shore Leave” offers a rather interesting analysis on the dangers of letting one’s imagination run wild. Likewise, 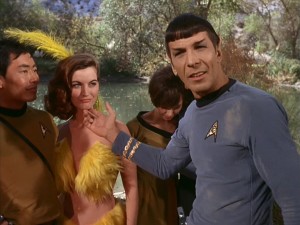 the concept of relying on intuition when physical senses cannot be trusted is also explored in this tale, and again in the superior “Spectre of the Gun” from season three.

fans who admire this show’s comedic offerings as much as its philosophically grounded episodes are advised to view “Shore Leave” for its entertaining premise. Even though several unrealistic moments undermine Kirk’s friendship with McCoy, any poorly conceived sequences can be forgiven in light of this episode’s upbeat tone.