After a cave-dwelling creature viciously kills over fifty miners in the tunnels of Janus VI, the Enterprise crew is called to investigate. Though Kirk wants the silicon-based monster 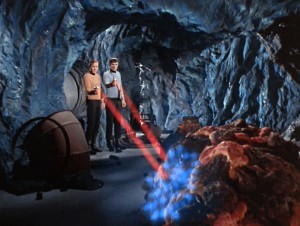 destroyed before it causes any further damage, Spock decides to ascertain its true motives by attempting a risky mind meld.

By combining intelligent dialogue with suspenseful atmosphere to convey a resonating morality lesson, “The Devil in the Dark” earns its status as one of the greatest Star Trek

episodes ever produced. While the ridiculous Horta costume may incite laughter from overcritical audiences, even modern viewers can appreciate Gene L. Coon’s lasting commentary on the importance of avoiding character judgments based entirely on outward appearances.

As implied earlier, the Horta’s resemblance to a giant meat loaf detracts from the realism of an otherwise phenomenal narrative. However, William Shatner and Leonard Nimoy managed to compensate for said budgetary issues by providing nuanced reactions to a supposedly grave threat. Notably, Spock’s harrowing response to sharing in the Horta’s agony helps convey the sympathetic nature of this monstrous being, while Kirk’s clever method of testing and establishing the creature’s intellect lends credibility to a seemingly outlandish concept.

None, aside from the occasionally goofy special effects.

Though similar to season one’s “Arena” in that both episodes explore the notion of a new species defending its territory from an encroaching Federation, “The Devil in the Dark” expands 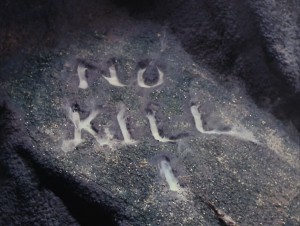 on this premise to incorporate larger themes of human arrogance and obliviousness toward environmental issues. Whereas audiences are at first led to believe that the killer lasagna senselessly picks off its victims in typical monster-of-the-week fashion, Spock’s mind meld later reveals that the cave miners were the true instigators in this brutal conflict, and that the Horta was nothing more than an overprotective mother shielding its offspring from a perceived danger. Through the aforementioned scenario, the Star Trek

creators managed to craft a subtle but thought-provoking commentary on humanity’s appalling disregard for nature and its creatures. 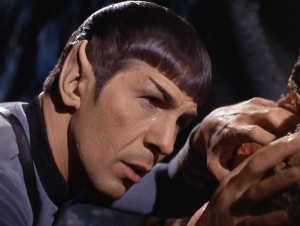 “The Devil in the Dark” combines humanistic science fiction with penetrating social commentary, resulting in another brilliant outcome from the production team behind Gene Roddenberry’s classic series. While the Horta’s likeness to a supreme pizza with extra sausage may amuse certain viewers, others are likely to appreciate this episode for its atmospheric elements and topnotch performances from Shatner and Nimoy.