In this classic episode, a time ripple emanating from an uncharted planet causes Dr. McCoy to inadvertently inject himself with a high dosage of cordrazine. Suffering 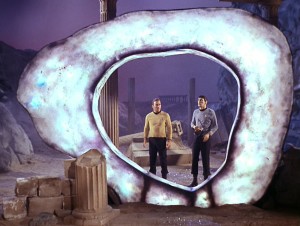 from temporary insanity as a result of the drug’s influence, McCoy beams down to the planet’s surface and travels through an ancient time portal known as the Guardian of Forever. Upon realizing that the doctor’s actions somehow altered history for the worse, Kirk and Spock follow McCoy through the portal and end up in New York City during the Great Depression. Kirk eventually discovers a way to prevent the catalyst that leads to a dark future, though not without paying a dear personal price.

episode ever made, “The City on the Edge of Forever” embodies all the passion, humor, and science fiction elements that defined 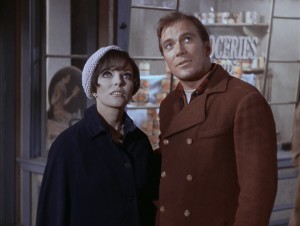 the original series. In addition to its remarkable execution of a brilliant story, this installment benefits from William Shatner’s poignant performance during a heart-wrenching conclusion involving Joan Collins’ Edith Keeler character.

Whereas Shatner’s goofy acting often inhibited Captain Kirk’s emotional side from manifesting in a believable fashion, the lead performer offered an unusually delicate approach when building a romance with Keeler. By conveying a series of conflicted and heartfelt reactions 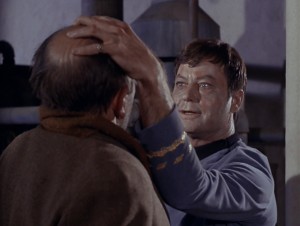 to the tragic circumstances that befall his character, Shatner emphasized the fact that Kirk’s relationship with Edith, however short-lived, stands out as the most personal of all the captain’s numerous romantic flings. Also noteworthy is DeForest Kelley’s chilling performance as a disturbed McCoy, whose actions lay the groundwork for Harlan Ellison’s time travel plot more effectively than the removed elements featured in the original script.

Additionally, Joseph Pevney’s swift but impactful pacing prevents clutter from hampering the quality of Ellison’s densely packed narrative. In allowing the audience just enough time to absorb one event before moving on to the next, 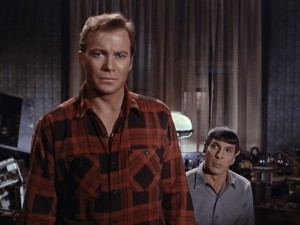 “The City on the Edge of Forever” maintains a resonating and well-balanced atmosphere throughout.

None, aside from several minor anachronisms.

In a similar vein to other prominent Star Trek

episodes and movies, “The City on the Edge of Forever” operates on the premise that the needs of the many outweigh the needs of 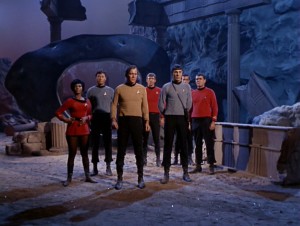 the few, or the one. Notably, Edith Keeler’s unwitting sacrifice serves to exemplify Gene Roddenberry’s humanistic viewpoint, for the death of Collins’ character ironically facilitates the very progress that she sought to achieve through her life’s work. Likewise, the aforementioned philosophical notion underlies Kirk’s primary conflict, in which the captain must allow his love interest to die so that countless billions may be saved as a result of her loss. Through scenarios such as the above, Roddenberry successfully laid the framework for a central ethical thesis that would remain mostly unchallenged until the events of Star Trek III: The Search for Spock

“The City on the Edge of Forever” is a phenomenal outing that combines solid time travel elements with a tragic love story. Those who admire Shatner’s subtle efforts over his notoriously hammy performances will appreciate this entry for reasons mentioned earlier, whereas science fiction buffs should appreciate Ellison’s unique method of propelling the central character trio through time and space.

2 thoughts on “Star Trek Episode 28: The City on the Edge of Forever”