After a humiliated Marilyn returns home from college for failing to meet a tuition deadline, Herman decides to pay the dean a visit. In a case of mistaken identity, Coach Roger Denman 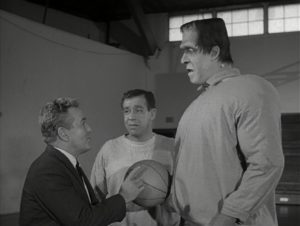 Though “All Star Munster” takes Herman’s stupidity to an astonishingly high level, fans of The Munsters

will enjoy this episode for its clever use of yet another mix-up scenario. Likewise, those who appreciate the style of humor that was popularized with The Beverly Hillbillies

Once again, a humorous situation arises from Herman’s inability to interpret and correct obvious misunderstandings before they get out of hand. While one must be willing to suspend 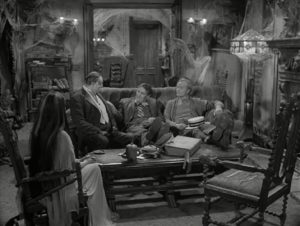 disbelief in order to accept that a college basketball coach would mistake Frankenstein’s monster for a new recruit, the hilarity that results from this unrealistic error in judgment fully compensates for any blatant credibility issues. Also amusing is the fact that Pop and Moose Mallory remain undisturbed by the Munsters and their ghoulish ways, which gives the eponymous family yet another chance to interact with “normal” members of society without scaring off everyone in sight.

Joe Connelly and Bob Mosher’s excessive reliance on redneck humor can be just a tad irritating at times. 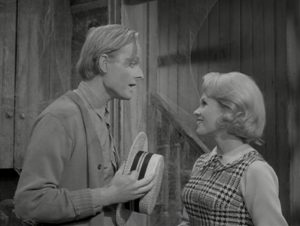 Despite Herman’s astounding display of ignorance, the goofy green giant proves himself to be a man of extraordinary character when he goes out of his way to resolve Marilyn’s tuition problem, and later when he helps Moose regain that which was rightfully his all along.

A cute episode, “All Star Munster” showcases a father-and-son pair whose kookiness parallels that of Herman and the gang. For audiences who appreciate Herman’s childlike responses to real-world situations, this one is a must.