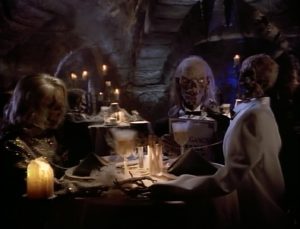 Upon receiving a series of threatening notes sent by an anonymous blackmailer, Howard decides to confront the man that he assumes, albeit wrongly, to be responsible.

“None but the Lonely Heart” makes clever use of a clichéd concept and may therefore appeal to fans of the black comedy genre. Though occasionally mean-spirited (the opening kill scene in particular should evoke sympathy from all but the most callous of viewers), this episode concludes on a note that will satisfy audiences with a compelling sense of justice.

Treat Williams should be commended for embodying the humble charm typical of a successful conman, thereby adding credibility to the notion that an affluent but lonely old woman would, in spite of her initial skepticism, allow herself to become deeply enamored with the prospect of a handsome young suitor (a faux display

of “impotence” further establishes Howard as a modest individual in the eyes of his intended victim). As if to reinforce his lack of conscience, Howard responds to an accusation of cruelty by convincing himself that he had done each of his now deceased wives a “very big favor” by giving her a final chance to feel loved—a classic case of reverse victimhood made realistic by Williams’ contemptible performance.

Effectively gruesome though it may be, the twist ending falls somewhat flat given that no reason, supernatural or otherwise, is presented to explain the resurrection of Howard’s multiple wives.

By confronting a black widower with his zombie ex-lovers, “None but the Lonely Heart” puts an original spin on the gold-digger trope (that being said, many prior Tales from the Crypt offerings had employed a similar premise).

The directorial debut of Tom Hanks, “None but the Lonely Heart” benefits from a hauntingly memorable climax. For those who enjoy visceral horror with a subtle comedic twist, this one is a must.