After archeologist Sir Joseph Whemple (Arthur Byron) uncovers the mummified remains of an Egyptian priest named Imhotep (Boris Karloff), a young assistant ignores the advice of Doctor Muller (Edward Van Sloan) and proceeds to read the Scroll of Thoth. Imhotep is subsequently resurrected and assumes the identity of Ardath

Bey, by which he requests that Joseph Whemple’s son, Frank Whemple (David Manners), excavate the tomb of Princess Ankh-es-en-amon. In order to make the princess his bride, Imhotep attempts to kill and mummify Helen Grosvenor (Zita Johann)—a young woman who, according to the ancient priest, is a reincarnation of Ankh-es-en-amon.

By emphasizing atmospheric horror over cheap thrills, The Mummy earns its reputation as a superior offering to the many sequels and remakes inspired by it. Especially commendable is Boris Karloff’s portrayal of Imhotep, which seamlessly combines the sophisticated manner of Bela Lugosi’s Dracula with the murderous proclivities inherent to Frankenstein’s monster.

The extraordinary premise of a 3700-year-old mummy returning to life is made credible by a restrained but menacing performance from Karloff, whose languid mannerisms, decrepit 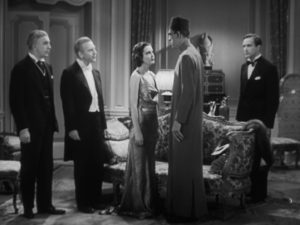 countenance, and hypnotic gaze provide Imhotep with a number of ominous qualities befitting his undead character. An air of supernatural power complements Imhotep most effectively when relying upon his mystical pool to murder and manipulate those around him, thereby proving himself to be a formidable adversary to Sir Joseph Whemple and Doctor Muller despite lacking the raw strength associated with his fellow Universal Monsters, namely Frankenstein’s creature and the Wolf Man.

In contrast to Frankenstein’s monster but similar to Count Dracula, Imhotep appears to relish the malevolent forces that compel him to commit deeds of a heinous nature; therefore, viewers may have difficulty sympathizing with Imhotep in spite of the mortifying circumstances surrounding his death via live burial.

As opposed to Stephen Sommers’ action-packed remake of the same name, The Mummy employs unseen rather than overt horror devices while building and maintaining suspense. One remarkably chilling instance of psychological manipulation occurs during the opening sequence, wherein Imhotep cracks open his 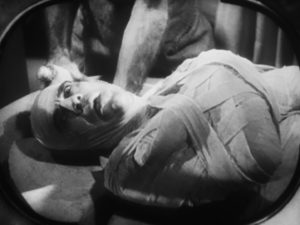 eyelids, gently grabs the Scroll of Thoth, and drives Ralph Norton (Bramwell Fletcher) to a point of raving insanity—all of which are accomplished without revealing the mummy’s entire form, an effect which would have prematurely spoiled the mystery that “shrouds” Imhotep until the appropriate time. On that note, the mere suggestion of vivisepulture combined with Karloff’s horrified reaction to being bandaged will no doubt elicit terror from audiences of a sensitive inclination—a response that can, as evidenced by the above examples, be evoked without resorting to copious amounts of explicit violence and gore.

Though hampered by the absence of a conflicted antagonist, The Mummy establishes a haunting atmosphere by coupling the gruesome legends of ancient Egypt with Karloff’s mesmerizing, albeit sinister, acting. Universal Monster fans are therefore advised to view this film, which, like Dracula and Frankenstein, benefits from the unintentional primitiveness typical of motion pictures produced during the early 1930s.