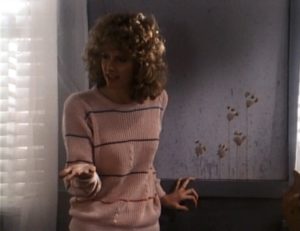 On her birthday, Susie (Jamie Ohar) is presented with a stuffed animal named Teddy. Disturbingly, neither of Susie’s parents—Joan (Marilyn Jones) and Richard (Tim Carhart)—remember purchasing a teddy bear for their daughter.

A loose remake of The Twilight Zone’s “Living Doll,” “Ursa Minor” maintains an atmospheric quality despite operating on a clichéd premise. Especially worth praising is the climactic scene, which puts an original twist on the haunted teddy bear concept.

Though somewhat laughable on paper, the notion of a malevolent children’s doll is made credible by the performance of Marilyn Jones. Notably, Joan at first 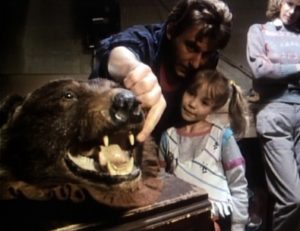 attributes Teddy’s mischief to the attention-seeking behavior of her daughter—an understandable reaction from a parent unable to cope with the stresses of everyday family life, let alone a possible threat of supernatural origin. When the antics of Teddy become impossible to ignore, Joan—now sympathetic as a result of her prior development—responds with a convincing display of terror as if to additionally enhance the realism of her situation.

Similar to the aforementioned “Living Doll” episode of The Twilight Zone, “Ursa Minor” complements overt horror devices with human conflict—an aspect that should allow audiences to invest in a narrative predicated on disbelief suspension. Specifically, Joan’s difficulties in balancing responsibilities at home (i.e. caring for a problematic daughter and her lazy, alcoholic father) with educational endeavors are conveyed in a believable fashion, thereby prompting viewers to actively root for the protagonist in spite of the fantastic, if not downright absurd, nature of her plight.

“Ursa Minor” should be commended for making suspenseful use of a predictable theme. Tales from the Darkide fans may therefore enjoy this episode, which employs a terrifying trope in conjunction with character-related tension.