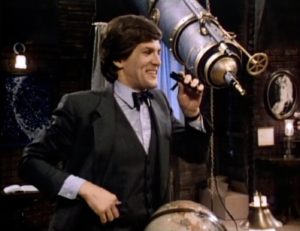 Having reemerged for the first time since Halley’s Comet approached Earth in 1910, Lara Burns (Sarah Rush) decides to remain in the present—much to the chagrin of Englebert’s overbearing wife Charlene (Kate McGregor-Stewart).

“Comet Watch” operates on a worthwhile science fiction concept. Tales from the Darkside viewers would nevertheless be wise to avoid this episode, the juvenile comedy of which will likely elicit cringing from those of a mature disposition. 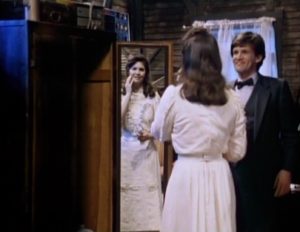 Upon arriving in the late 20th century, Lara struggles to break the communication barrier between herself and Englebert—a fact that results in many humorous, albeit somewhat groan-inducing, interactions between both characters; for example, Lara—fearing she may have aged in the seventy-five years spanning her absence—requests a (looking) glass, prompting Englebert to ask what she would like in it.

The gravitas of Edmund Halley—portrayed in a suitably elegant fashion by the late Fritz Weaver—generates an amusing contrast to the crude, obnoxious demeanor of Charlene. Despite benefiting from an eloquent delivery, however, Halley’s fat jokes directed at 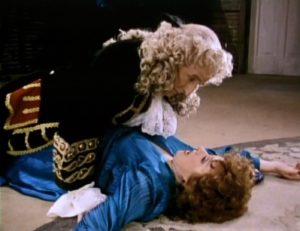 Charlene serve to cheapen the natural chemistry shared by Weaver and McGregor-Stewart.

Though initially clever, the dialogue and situations featured in “Comet Watch” grow entirely repetitious over time—a consequence of writers Jule Selbo and Harvey Jacobs choosing not to explore their own premise (i.e. temporal displacement caused by Halley’s Comet) in a serious and thought-provoking manner.

This review is dedicated to Fritz Weaver, who passed away last week at the age of 90.