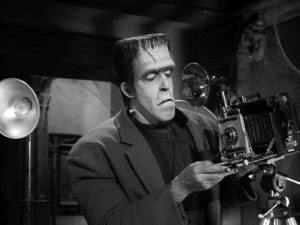 scene of a crime. After Lily explains the situation to her naive husband, Herman attempts to notify the police of his photograph; but not before Rod and Lou track down the Munster Koach and arrive at Herman’s doorstep.

By employing groan-worthy puns (e.g. “bird”-brained Herman in reference to a pigeon-related mishap) in conjunction with special effects of a ridiculous nature, “Herman Munster, Shutterbug” will appeal to fans of the absurd, zany humor for which The Munsters is famous. Especially worth noting are the terrified responses of Rod and Lou—two hardened criminals—toward the Munsters and their normal, daily routine.

While completing a photoshoot in the park, Herman elicits a variety of mortified (albeit hilarious) reactions from those nearby. Notably, a little old lady 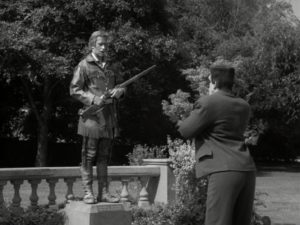 decides to go for a “swim” upon spotting Herman lurking in the trees behind her—a classic Munster gag that works exceptionally well in this case, possibly due to the concept of a frail, elderly woman diving full-speed into a pond when greeted by Herman. Viewers will likewise enjoy Herman’s interaction with a Daniel Boone statue, which promptly springs to life, fires a rifle (also an inanimate object just moments prior), and runs away panicking before having his picture taken by the Munster patriarch.

Rod and Lou unwittingly drink Grandpa’s “pigeon potion” and fly to the police station of their own accord, resulting in a convenient solution to the Munsters’ problem. 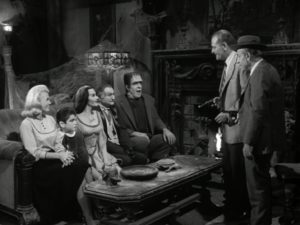 Herman chooses to inform the authorities of his incriminating photograph despite the dangers involved, thereby demonstrating an admirable concern for justice (it should, however, be mentioned that Herman expects a “reward” for this action and prepares to call the police only at Lily’s behest).

Similar to “Don’t Bank on Herman” from season one, “Herman Munster, Shutterbug” puts a delightful twist on the bank robbery trope. Sitcom buffs will therefore appreciate Dick Conway’s clever, if occasionally hackneyed, premise for this episode.