While traveling from St. Louis to the New Mexico Territory, wagon train member Christian Horn (Cliff Robertson) must temporarily abandon his fellow travelers to search for water. Having nearly been crushed by an eighteen-wheeler, Chris 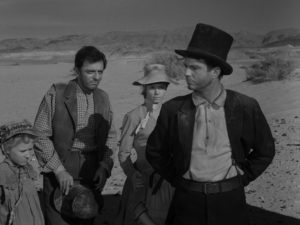 wanders into a café owned by married couple Joe (John Crawford) and Mary Lou (Evans Evans). Shortly thereafter, Chris—now aware that over one hundred years have suddenly and inexplicably elapsed—attempts to deliver a bottle of modern medicine to his son, whose ailment will surely kill him if left untreated.

“A Hundred Yards Over the Rim” puts a unique and memorable spin on the fish-out-of-water trope. Rod Serling enthusiasts are therefore advised to view this entry, minor historical inaccuracies notwithstanding.

Though entirely fantastic, the time leap in this episode is made credible by the performance of late actor Cliff Robertson, whom fans of The Twilight Zone will recognize from season three’s “The Dummy.” For example, when observing the

combination of dismay, confusion, and desperation expressed by Chris upon arriving in 1961, viewers should have no difficulty accepting that a temporal anomaly has just occurred.

Complementing the quizzical reactions of Robertson, the skeptical attitudes of Joe and Mary Lou are exactly what one would expect of two ordinary, then present-day people confronted with a pioneer sporting an “antique” rifle. Notably, both characters hesitate to accept Chris at face value, but can offer no explanation for his anachronistic behavior—a conflicted response that few time travel narratives have managed to depict in such a believable fashion.

“A Hundred Yards Over the Rim” contains an early example of the predestination paradox, now a common theme in the science fiction genre—yet another indication that 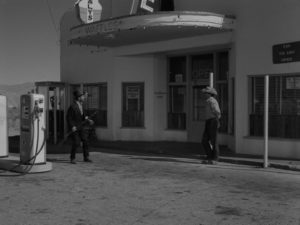 Serling was well ahead of his time, perhaps in more ways than one. Specifically, Chris travels to the future and takes a bottle of penicillin with him upon returning to the past, thereby saving the life of his pneumonia-stricken son, who, as implied in a medical encyclopedia, would later discover the antibiotic responsible for curing him—a fascinating, if highly illogical, twist ending that serves to challenge the scientific principle of causation. 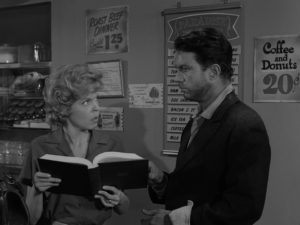 The first installment of The Twilight Zone starring Cliff Robertson (known for his portrayal of Uncle Ben in Sam Raimi’s Spider-Man trilogy), “A Hundred Yards Over the Rim” should be praised for its compelling use of a bizarre premise. Especially worth commending are the performances in this episode, which add an air of realism to the extraordinary plot device employed by Serling.