Herman and Grandpa combine their talents to create a birthday present for Eddie, but initiate a terrible feud when things go awry. In order to sufficiently avoid 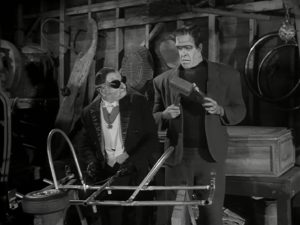 each other, Grandpa and Herman divide the house with a white line and remain on opposite sides of it. Only the efforts of Lily and Marilyn can restore peace in the Munster home.

Despite employing an oft-used trope, “A House Divided” contains many hilarious exchanges between the Munster patriarch and his father-in-law. Therefore, comedy enthusiasts are advised to view this effort. 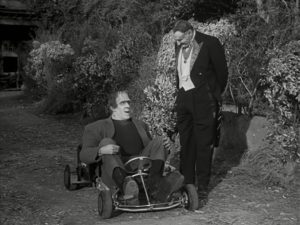 Taking Eddie’s go-kart for a test ride, Herman plows into a fire hydrant, nearly collides with an approaching vehicle, and chases Grandpa up and down the street before crashing into a curb—comedic devices that, when executed with fast-motion cinematography, will surely entertain fans of the kooky, zany humor commonly featured in The Munsters.

Though amusing at first, the incessant bickering of Herman and Grandpa (the rivalry of whom had been thoroughly exhausted by this late point in the 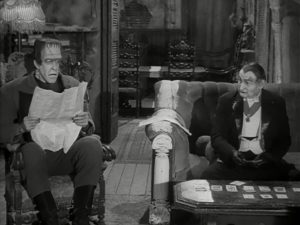 series) grows quite repetitive, if not tedious, after a while.

Having set aside their differences, Grandpa and Herman construct a small airplane for Eddie and present it to him on his birthday. Mistaking the gift for a coaster wagon, Eddie responds in a dismissive and highly ungrateful manner—an aspect that will disappoint viewers who admire the Munsters for their wonderful, albeit extremely bizarre, family values. 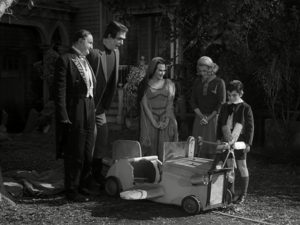 By reconciling with each other, Herman and Grandpa—caricatures of the Frankenstein monster and Count Dracula, respectively—ironically demonstrate a higher capacity for forgiveness than do the majority of sitcom characters.

“A House Divided” is a mostly worthwhile episode of The Munsters. There are times, however, when the petulant behavior of Herman and Grandpa borders on the obnoxious.