When Eddie writes an English composition about his family, Ms. Thompson (Pat Woodell) and Mr. Bradley (Willis Bouchey)—a teacher and principal at 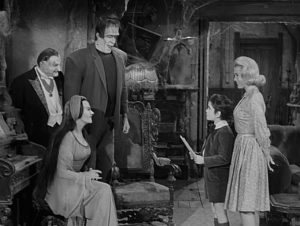 Mockingbird Heights Elementary—pay a visit to the Munster home. Meanwhile, Grandpa invents a machine that can harness electricity from lightning bolts, causing a power outage when Herman introduces himself to the school administrators.

The final episode of The Munsters, “A Visit from the Teacher” will appeal to fans of the classic (albeit corny) misunderstanding tropes that define this series. Specifically worth praising are the ways in which Mr. Bradley and Ms. Thompson attempt to rationalize the kooky, bizarre content of Eddie’s composition, thereby setting the stage for a hilarious encounter with Lily, Marilyn, Herman, and Grandpa.

In one scene, Munster family members Herman, Lily, and Grandpa gather around the organ to perform their own version of “Bury Me Not on the Lone Prairie.” 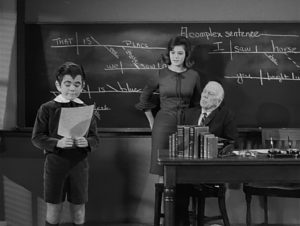 Though played strictly for laughs, the above sequence should be commended for providing Fred Gwynne—the rich, baritone voice of whom had been used to record “Dry Bones,” the signature tune from “Will Success Spoil Herman Munster?”—and Yvonne De Carlo, whose character sings alongside a group of beatniks in “Far Out Munsters” from season one, with an opportunity to showcase their extraordinary vocal abilities.

While fleeing from Herman, Mr. Bradley and Ms. Thompson are trapped in the Munsters’ coffin booth—a comedic device employed to a more humorous effect in the previous episode, “Herman’s Lawsuit.” 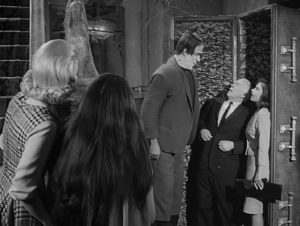 During their visit to the Munster home, Ms. Thompson and Mr. Bradley invent a number of excuses (e.g. malnutrition resulting in green skin) to explain the idiosyncratic features of Lily, Herman, and Grandpa—possibly a commentary on the presumptuous, ill-informed nature of many bureaucratic school officials.

By emphasizing the horrified reactions of two normal, well-adjusted people (i.e. Mr. Bradley and Ms. Thompson) when confronted with Herman and the gang, “A Visit from the Teacher” makes effective use the one-note premise on which it operates. For this reason, sitcom enthusiasts would be wise to view this unofficial series finale.