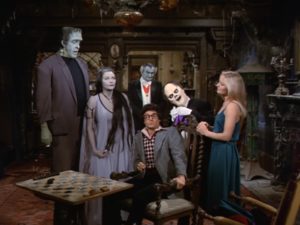 and Herman are framed as jewelry thieves by Dr. Dustin Diablo (Sid Caesar)—a criminal mastermind whose wax museum contains robotic, lifelike replicas of the Munster family. Only with the help of Glen Boyle (Peter Fox), a detective with a romantic interest in Marilyn, can Herman and Grandpa clear their names and expose Diablo to the police.

Though mildly nostalgic, The Munsters’ Revenge never recaptures the innocent charm of the original television series. This offering should also be criticized for its problematic approach to humor, which can only be described as corny, juvenile, and forced—even by the zany standards of The Munsters. 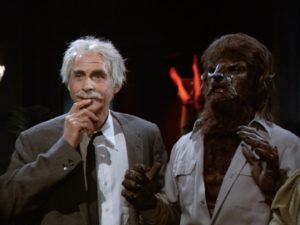 Visiting Transylvania, Grandpa and Herman enter a dilapidated, medieval fortress during a lightning storm and greet Cousin Igor (Howard Morris), who, after surfacing from an old coffin, reveals that an angry mob intends to burn the castle to the ground—a clever, if extremely silly, homage to the classic horror movies (e.g. Dracula and Frankenstein) that inspired The Munsters.

While singing in a falsetto, Cousin Phantom (whose countenance resembles that of Lon Chaney’s character from Universal Studios’ The Phantom of the Opera) shatters every glass object in whatever room he occupies—a running gag that, though slightly amusing at first, is overplayed to the point of becoming tedious.

In one scene, Dr. Diablo employs an inordinate amount of exposition simply to explain his convoluted scheme to a small audience. Viewers may therefore struggle to understand, let alone relate with, the character of Diablo, whose motivations for stealing an ancient mummy (supposedly a “brother” of his) border on the absurd.

Evading the police, Herman and Grandpa don a pair of waitress uniforms and begin working at a local diner. Despite being somewhat humorous on paper, the concept of a “female” Herman had been executed to a more hilarious effect in “Just Another Pretty Face”—an iconic episode of The Munsters. 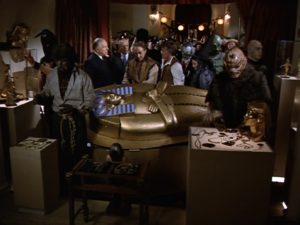 By having the Munsters embark on extraordinary adventures, The Munsters’ Revenge fails to respect the ironic premise (i.e. a family of monsters living “normal” lives in 1960s America) of the aforementioned television series.

The Munsters’ Revenge is a drawn-out, painfully unamusing revival of The Munsters—a much superior parody of the Universal Monster films. Thus, for sitcom enthusiasts and horror/comedy fans alike, this made-for-television special should be avoided at all costs.