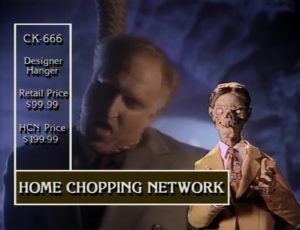 travels to the house of Ma (Tim Curry), Pa (Tim Curry), and Winona Brackett (Tim Curry) with a fake proposal in mind. Though initially confident, Judd discovers that the Bracketts have a great deal of experience in dealing with shady, silver-tongued salespeople.

“Death of Some Salesmen” should be commended for allowing Tim Curry (whom many Tales from the Crypt viewers will recognize from Stephen King’s It and The Rocky Horror Picture Show) to explore his diverse talents as a character actor. Also worth noting is a cameo appearance from Yvonne De Carlo, best known for her portrayal of Lily—a gothic housewife in the original version of The Munsters.

Trapped in the Brackett home and bound by a pair of manacles, Judd pretends to be enamored of Winona—a morbidly obese, hunchbacked woman with bad 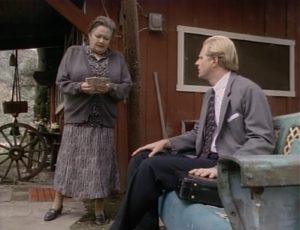 skin and poor personal hygiene—in order to win her trust and thereby obtain a handcuff key from her father. Skeptical, Winona escorts her new guest into a nearby bedroom, forcing him to prove his “love” in a highly perverse, if not downright sickening, display of affection—arguably the most revolting sequence ever featured in a Tales from the Crypt episode, and one that will appeal to fans of the horror/comedy crossover genre.

Despite operating on a clever and original premise, “Death of Some Salesmen” is marred by a nonsensical revelation in the final scene.

By putting a murder-themed twist on the traveling salesman trope, “Death of Some Salesmen” delivers justice in a tongue-in-cheek manner.

A character piece for Tim Curry, this installment deserves its reputation as a classic episode of Tales from the Crypt. Those with a sensitive stomach should, however, avoid “Death of Some Salesmen,” which, in spite of its limited gore, contains a cringe-worthy love scene between two vile, disgusting people.