Arriving from outer space, Hedorah—a microscopic alien lifeform—feeds on the waste material present in the oceans of Earth, later growing into a 60-meter-tall, 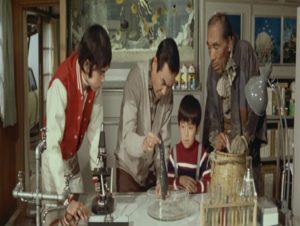 acid-spewing daikaiju whose toxic emissions pose a terrible danger to the people of Japan. Only Godzilla, apparently determined to stomp out the world’s pollution, can save humanity from Hedorah in his ultimate form.

Arguably the most bizarre installment in Toho’s kaiju eiga franchise, Godzilla vs. Hedorah (also released as Godzilla vs. the Smog Monster) will appeal to fans of campy, B-grade science fiction films. Nevertheless, this movie deserves criticism for its dated subject matter, incongruous direction, and overly heroic portrayal of Godzilla. 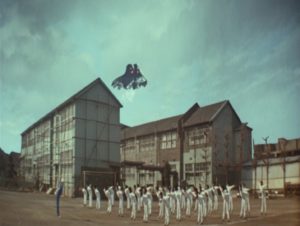 Godzilla vs. Hedorah relies upon dark color palettes to accentuate the gritty, ominous nature of the so-called Smog Monster, which prove most effective during the serious, action-heavy battles between Godzilla and his opponent. (Certain musical selections from composer Riichiro Manabe do, however, hamper the foreboding qualities of Hedorah’s presence in this film.)

By amalgamating the child-friendly spirit of All Monsters Attack with the somber, haunting atmosphere of Gojira and Mothra vs. Godzilla, Godzilla vs. Hedorah fails to maintain a consistent tone from start to finish. Especially distracting are 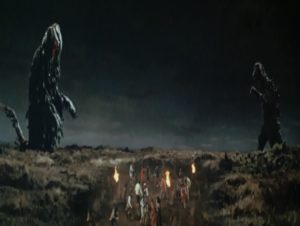 the film’s cartoon segments, which, though cleverly animated, frequently clash with the images of death, deformity, and devastation featured in this offering.

Assisting the JSDF, Godzilla employs his atomic breath to activate two giant electrodes that, if utilized correctly, will evaporate all of the moisture inside Hedorah’s body. In addition to its plodding and repetitive execution, the climactic scene is marred by one significant flaw: despite being a mindless creature driven only by destructive tendencies, Godzilla somehow discovers that a man-made mechanism can be used to extinguish Hedorah with relative ease. 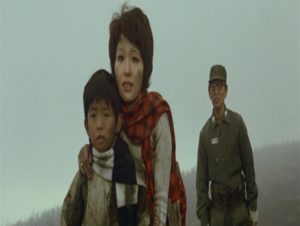 Similar to the original version of Godzilla, Godzilla vs. Hedorah conveys a political message (i.e. a not-so-subtle commentary on the consequences of environmental pollution) through a monster-themed premise.

Godzilla vs. Hedorah is a mildly entertaining, if uneven, entry in the Showa series. Japanese monster enthusiasts in particular may enjoy this production, which benefits from many bleak and moody sequences reminiscent of Ishiro Honda’s 1954 masterpiece.