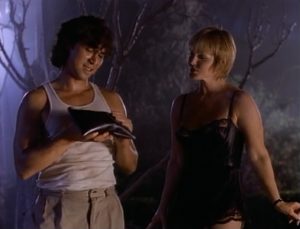 Spider (Rory Calhoun), William (Steve Kahan), and Mr. Petermeyer (Noble Willingham) into believing that an oil reservoir lies beneath a local cemetery. Unbeknownst to Gina, Jerry and the boys have a plan of their own in mind.

“Oil’s Well That Ends Well” should be criticized for its convoluted plot, cringe-worthy dialogue, and utter absence of traditional horror themes. Tales from the Crypt enthusiasts may, however, wish to view this episode, which features a cameo appearance from John Kassir—known for providing the voice of the Crypt Keeper.

In the closing segment, the Crypt Keeper commends one of the cast members (i.e. Kassir) for being a great “hacktor” and having a voice that reminds him of “someone” he knows—an inside joke that will surely amuse fans of this series.

“Oil’s Well That Ends Well” fails to generate the dramatic tension/conflict that one would tend to associate with a crime thriller, instead spending the majority

of its running time on tedious, overcomplicated exposition. Many viewers may therefore struggle to invest in the outcome of Jerry and Gina’s con, the details of which are never simplified or made interesting for the audience.

In addition to lacking the suspense or intrigue of a typical Tales from the Crypt offering, “Oil’s Well That Ends Well” is marred by a series of implausible, if not thoroughly ridiculous, twist revelations during and immediately prior to the climactic scene, resulting in more confusion than necessary. 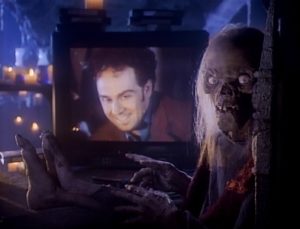 Though poorly executed, the conclusion to this episode deserves minor praise for delivering justice against a group of thieving, backstabbing characters.

A forgettable season-five entry, “Oil’s Well That Ends Well” makes inefficient use of an exceptional cast. This episode should nevertheless be noted for featuring the final performance of Rory Calhoun—a prolific actor known to horror buffs for starring in Motel Hell, a satire of Psycho and The Texas Chainsaw Massacre.