Awakened by an atomic blast, a one-hundred-million-year-old dinosaur begins rampaging along the east coast of North America. Only the testimony of Professor

Possibly the first science fiction movie to comment on the dangers of nuclear testing, The Beast from 20,000 Fathoms will appeal to kaiju enthusiasts and Ray Harryhausen fans alike. Additionally worth noting is the extensive character development featured in this film, adding a personal component to the human/monster conflict suggested by Ray Bradbury. 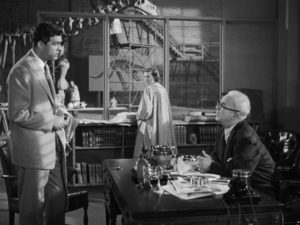 Initially the only surviving witness of the Rhedosaurus, the main protagonist goes to extraordinary lengths while proving his story to Professor Elson (Cecil Kellaway), Colonel Evans (Kenneth Tobey), and others of a skeptical mentality. In addition to serving as a commentary on the stubborn, uninquisitive mindsets of many prominent figures in the scientific community, the predicament of Tom Nesbitt compels the audience to sympathize with and root for the success of his character—an aspect that should also allow viewers to invest in the climactic scene, during which Tom, accompanied by a military sharpshooter named Corporal Stone (Lee Van Cleef), must risk his life while confronting the titular beast.

On a technical level, The Beast from 20,000 Fathoms deserves commendation for its remarkable creature effects. Specifically, the fluid movements and realistic 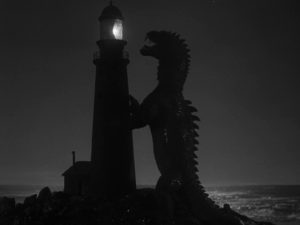 design of the Rhedosaurus (brought to life by the stop-motion animation of Harryhausen) enhance the credibility of a prehistoric, radioactive dinosaur wreaking havoc on a modern-day metropolis—much in contrast to the majority of creature features produced during the 1950s, which frequently employ cheap rubber suits, moving props, and other unsophisticated techniques to create the illusion of a giant monster existing in the real world.

Providing inspiration for the original version of Godzilla, The Beast from 20,000 Fathoms offers a nuclear metaphor in conjunction with a typical monster movie setting—a formula now associated with nearly every sci-fi/horror film released during the Atomic Age.

The Beast from 20,000 Fathoms should be praised for its invaluable influence on the science fiction genre. Monster buffs young and old should therefore appreciate this iconic and suspenseful offering, dated subject matter notwithstanding.