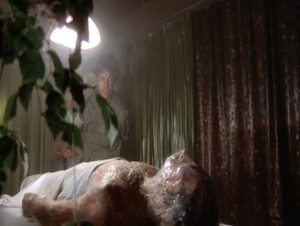 Combining body horror tropes with penetrating social commentary, Invasion of the Body Snatchers earns its reputation as the quintessential remake. Specifically deserving of mention are the horrifying plot twists, fascinating science fiction concepts, and topnotch performances (especially that of Star Trek actor Leonard Nimoy) that distinguish this film from its equally iconic predecessor. 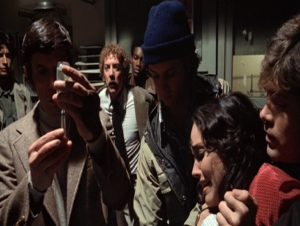 Invasion of the Body Snatchers contains a variety of memorable and well-developed characters, the individual backgrounds, occupations, and personality quirks of whom reinforce the underlying themes of this film (i.e. uniqueness, human diversity, and maintaining one’s identity in a conformist culture). Worth noting in particular are the five protagonists and how they complement each other: Matthew Bennell, a health inspector with heroic qualities; Elizabeth Driscoll, a quiet lab analyst; Dr. David Kibner, a skeptical psychiatrist hiding a dark secret from the others; Jack Belicec, an eccentric writer and conspiracy theorist; and Jack’s wife Nancy, the hysterical tendencies of whom provide the audience with a vicarious emotional release. 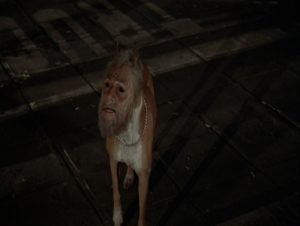 This offering should also be commended for its creepy and surreal images, which enhance the horror aspects of Jack Finney’s original narrative. Highlights include the pod birthing sequence, the rapid decomposition of a human body, and a small dog with a banjo player’s head attached to it—all of which expand on the ideas initially suggested by the 1955 novel. 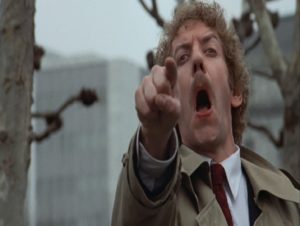 As opposed to the small-town setting featured in the 1956 movie, the urban location of this film allows for an insightful, albeit disturbing, statement on the alienation and lack of personal connection in modern society. Note, for example, that Elizabeth grows terribly suspicious of those who “recognize” each other, highlighting the fact that most people, at least when living in a large city, expect isolation over human contact by default.

This film offers a well-acted, visually haunting, and thought-provoking update on a classic alien invasion story. Sci-fi/horror enthusiasts will therefore enjoy Invasion of the Body Snatchers, which maintains an eerie, suspenseful tone from beginning to end.