After receiving a distress signal, spacefaring vessels Galliot and Argos travel to a mysterious planet to investigate. Upon landing, certain crew members are possessed by luminous, parasitic beings who wish to inhabit human hosts, gain control of

a starship, and escape from the dying world of Aura. Only Captain Mark Markary (Barry Sullivan) and several others can prevent the Aurans, now in control of the deceased expedition members, from carrying out their malevolent plans for the human race.

Emphasizing style over substance, Planet of the Vampires deserves criticism for its cardboard characters, dated special effects, and lack of a strong central protagonist. This offering does, however, benefit from a variety of bizarre and masterfully designed alien props, gore-plastered zombies, and a twist ending that will satisfy enthusiasts of nihilistic/apocalyptic science fiction films. 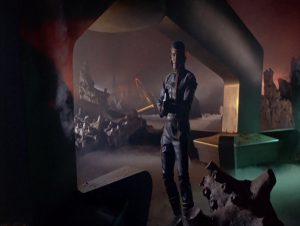 While exploring the planet Aura, the crew members of spaceships Argos and Galliot encounter many ominous tropes (e.g. inexplicable flashes of light; garbled sound recordings of an alien language; and a giant, fossilized skeleton reminiscent of the Space Jockey from Ridley Scott’s Alien) that establish a chilling, claustrophobic atmosphere. Sci-fi/horror fans may therefore appreciate this film, which, in spite of its budgetary limitations, offers a creepy and effective twist on the concept of alien possession.

Much in contrast to Alien and It! The Terror from Beyond Space (two similarly themed space adventure/horror films), Planet of the Vampires is marred by 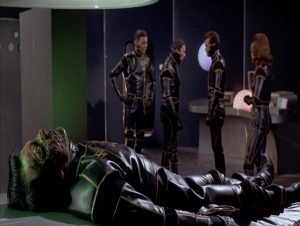 wooden performances and an utter absence of character development. Especially unremarkable is Barry Sullivan’s portrayal of Markary, who, as opposed to Captain James Kirk and Professor John Robinson, fails to embody the charisma that one would expect of a starship commander.

A slow-burn horror movie, Planet of the Vampires generates a thick layer of atmospheric tension before revealing the true, terrifying nature and intentions of the Auran phantoms. As a result of this, a number of scenes are drawn out to the point of extreme tediousness. 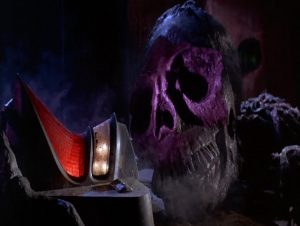 By relying on the power of suggestion while building suspense, Planet of the Vampires succeeds in creating a spooky, phantasmagorical setting despite many obvious technical constraints—an accomplishment that few horror films have since managed to duplicate.

Planet of the Vampires is an aesthetically haunting, if narratively flawed, effort from Italian director Mario Bava. Thus, for those who admire H.R. Giger’s artistic vision for Alien (likely influenced by the gothic elements of the Auran world), this production will not disappoint.