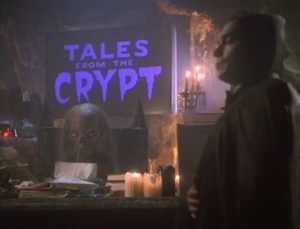 of murder. Thereafter, Dudley—assisted by the ghosts of his dead brothers—builds a “Frankenpig” to exact revenge on the wolf.

The final episode of Tales from the Crypt, “The Third Pig” may appeal to diehard series enthusiasts. Casual viewers, in contrast, may wish to avoid this poorly animated, uninspired effort at all costs. 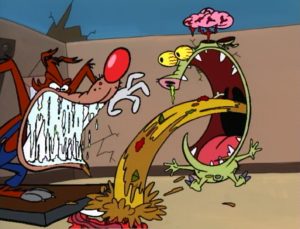 In the opening segment, the Crypt Keeper interviews a vampire for a writing position on Tales from the Crypt—a tongue-in-cheek reference to the fact that by 1996, nearly every worthwhile story from the source comics (Haunt of Fear, Tales from the Crypt, Vault of Horror, and several others) had already been utilized in prior episodes.

A morbid reimagining of The Three Little Pigs, this offering contains all the elements of a spooky, Halloween-themed children’s cartoon: a ravenous wolf, 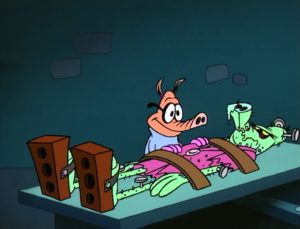 a mad scientist, and a Frankenstein monster. Nevertheless, The Third Pig relies on copious gore, crude humor, and sexual innuendoes as opposed to clever and original storytelling, likely preventing young audiences and mature horror fans alike from enjoying this episode.

Also problematic is that The Third Pig lacks a coherent and well-developed narrative, instead jumping from one random plot point to the next. (Those who appreciate the gory and surreal animation of Superjail! may, however, view the above shortcoming as a positive factor.)

“The Third Pig” is a bizarre, low-brow piece of experimental comedy. Sophisticated horror buffs may therefore choose to forgo this episode, which offers a juvenile twist on a classic fable.