Synthesizing a drug from the blood of bats, Dr. Matthew Campbell succeeds in returning the human mind to a primitive state. After inadvertently consuming 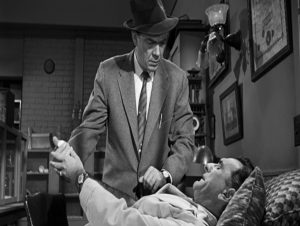 Similar to Blood of Dracula (also released in 1957), this offering combines mad scientist tropes with elements of the vampire legend. Therefore, The Vampire should be required viewing for enthusiasts of the sci-fi/horror crossover genre.

Actor John Beal should be commended for his portrayal of Paul—a likable small-town doctor who, by circumstance alone, turns into a feral, vampire-like monster.

Specifically, Paul embodies the inner conflict of a tortured soul, even attempting suicide to prevent himself from killing others—an aspect that, due to the convincing emotions of Beal, will prompt the audience to sympathize with the protagonist.

Also noteworthy is the performance of Dabbs Greer (known for playing Reverend Alden in Little House on the Prairie), whose character offers temporary stability for Paul—similar to Sir John Talbot, who, in Universal Studios’ The Wolf Man, provides Larry Talbot with a source of clarity and comfort prior to his inevitable demise.

Though often obscured by dim lighting, the make-up effects in The Vampire leave much to be desired on a technical level. Especially deserving of criticism are the monster’s lumpy hands, bushy eyebrows, and uneven skin texture, all of which

undermine the credibility of a vampire—scientifically engineered or otherwise—coming into existence and lurking around a 1950s suburban neighborhood.

In addition to its unconvincing creature effects, this film is marred by languid pacing and copious exposition—both of which prevent the titular vampire from appearing until extremely late in the story.

The Vampire should be praised for highlighting the power of addiction in realistic, harrowing detail. Notably, Paul initially consumes one of Dr. Beecher’s pills by accident, leading him down a path of darkness, dependency, and alienation from

others—a compelling depiction of those who, perhaps unintentionally, develop terrible drug habits and self-destruct as a result.

Presenting a then unique, original take on vampire fiction, this film will appeal to creature feature buffs and science fiction fans alike. The Vampire is, however, hampered by the typical shortcomings of a low-budget horror production.