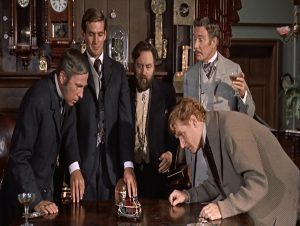 that he had recently built a time machine and traveled to AD 802,701—a year by which all humans have descended into two distinct species: the incurious, playful, surface-dwelling Eloi and the predatory, cannibalistic Morlocks who live underground. Continuing his account, George tells of his relationship with a young female Eloi known as Weena (Yvette Mimieux) and a ferocious battle with the Morlocks.

Offering a then modern update on one of the most popular sci-fi stories ever written, The Time Machine should be requisite viewing for fans of H. G. Wells. 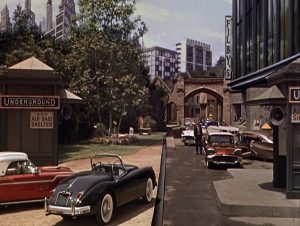 Especially worth mentioning is the dark and harrowing future presented in this film, likely inspiring later works of dystopian fiction.

Rod Taylor deserves praise for his portrayal of George, who, by responding to cultural and political changes in a convincing manner, strengthens the credibility of The Time Machine’s main narrative premise. Exceptionally powerful are the reactions of George—formerly an optimist/humanist—when faced with two world wars, the collapse of civilization, 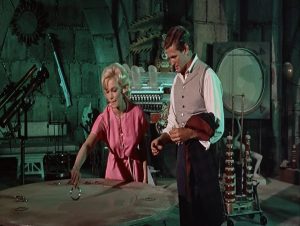 and the eventual loss of man’s accumulated body of knowledge.

This production should also be commended for its riveting special effects, which enhance the realism of George’s journey through time. Highlights include a decomposing Morlock, the rapid arcing of the Sun, the destruction of London via nuclear hellfire, and the erosion of solid rock occurring within a matter of seconds—all of which are depicted through detailed miniature sets and stop-motion animation.

Despite existing over 800,000 years in the future, the Eloi communicate with George through perfect, unbroken English. (The above shortcoming can, however, be excused for the sake of convenience.)

As opposed to H. G. Wells’ original novel, a story about class divisions resulting in an evolutionary rift within the human race, George Pal’s The Time Machine (produced during the Cold War) serves as a cautionary tale on the consequences, both long-term and immediate, of a global nuclear conflict—a theme that future science fiction efforts (e.g. the film version of Planet of the Apes) would explore in similar detail.

The Time Machine is a captivating sci-fi/adventure film by Pal—producer of The War of the Worlds. Specifically, this offering should be noted for its topnotch acting, haunting visual effects, and resonating social commentary.