Rance McGrew (Larry Blyden), a buffoonish and pretentious actor known for playing the town Marshal on a long-running TV series, is transported back in 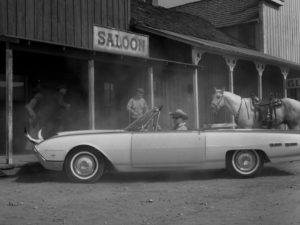 time and confronted by the real-life Jesse James (Arch Johnson). Thereafter, Rance gains a new perspective on the legendary figures of the Old West.

Filmed in a single location, “Showdown with Rance McGrew” is an unremarkable episode of The Twilight Zone. Fans of Gunsmoke and Bonanza may, however, enjoy this offering—obviously a Western-themed parody of the television business. 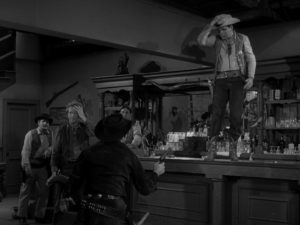 “Showdown with Rance McGrew” benefits from the performance of Arch Johnson, whom enthusiasts of The Twilight Zone may recognize from season two’s “Long Distance Call” (in an uncredited role) and “Static.” Specifically, Johnson’s towering height and intimidating manner make for an intense, if clichéd, portrayal of bank robber Jesse James.

Operating on a one-note premise, “Showdown with Rance McGrew” is marred by comedic devices of a repetitious nature. Worth criticizing in particular are the 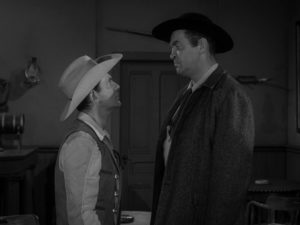 antics of the main character, whose incompetent behavior grows rather tedious after a while.

Though a clever satire on big-shot Hollywood actors, “Showdown with Rance McGrew” includes many tongue-in-cheek references to the Western genre of television—a dated format that modern audiences will likely fail to understand or appreciate. 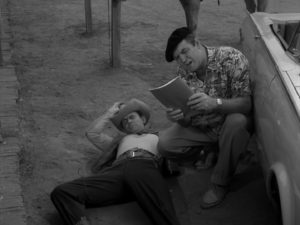 This installment contains a laudable, if comically executed, lesson on the importance of earning one’s status in life.

“Showdown with Rance McGrew” is a mildly humorous entry of The Twilight Zone. Certain viewers may nevertheless wish to avoid this episode, which fails to highlight the bizarre plot twists, intriguing subject matter, and compelling narrative tension of a typical Rod Serling effort.