who offer to end starvation, cure all disease, and share advanced technology with the world. A complication soon occurs when Patty (Susan Cummings), a colleague of Chambers, makes a horrifying discovery about the Kanamit race.

Combining stock footage from The Day the Earth Stood Still and Earth vs. the Flying Saucers with insightful commentary on the human condition, “To Serve Man” will appeal to alien invasion buffs, science fiction enthusiasts, and diehard fans of The Twilight Zone. Given its lack of realism, however, this episode should be taken only as an allegory of man’s overly trusting nature.

By generating an air of mystery around the Kanamits, this offering manages to captivate the audience despite operating on a simple, if clever and imaginative, story concept. Especially worth noting are the opening spaceship segment, the United Nations gathering, and the constant references to food, weight, and hunger—all of which serve to foreshadow a terrible surprise in the climactic scene. 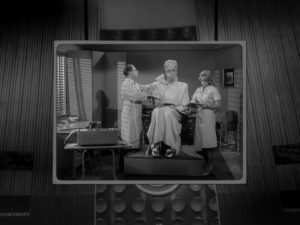 exposing their intentions to the human race. Second, viewers are led to believe that the Kanamits, though capable of growing food from barren soil, travel through interstellar space simply to enjoy a culinary treat (i.e. humans)—a weak and underdeveloped premise, suspension of disbelief notwithstanding. (Nevertheless, the “cookbook” revelation earns its reputation as the most effective twist ever featured in The Twilight Zone.)

Welcoming the Kanamits with open arms, the characters in “To Serve Man” reveal a disturbing truth about the human tendency to believe any message, regardless of

how fantastic, when presented by an appealing source. Note, for example, that neither Patty nor Mr. Chambers, two highly intelligent people, ever consider that an alien from another galaxy could easily rig a polygraph test, thereby concealing his true motives from the entire world—a statement on how the majority of individuals, brilliant or otherwise, can allow themselves to be conned by an ostensibly charming or magnanimous figure.

“To Serve Man” deserves its status as the quintessential episode of The Twilight Zone. Specifically, this installment should be commended for its profound social commentary, ominous makeup effects, and unforgettable twist ending.