After a giant statue is removed from Wester Island, Jiger—a giant, reptilian kaiju who vaguely resembles a triceratops—begins wreaking havoc on civilization. 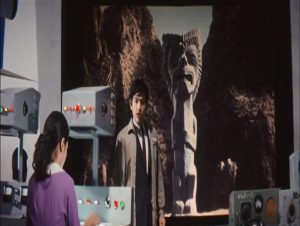 Despite his attempts to thwart Jiger, Gamera is paralyzed by a tail spike and presumed dead by the people of Japan. Only two children, one American and the other Japanese, can save Gamera from Jiger’s deadly attack. 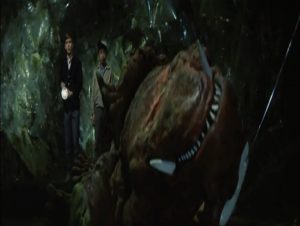 After Jiger infects Gamera with a parasitic monster, two small boys decide to commandeer a submarine, enter Gamera’s digestive tract, and remove the creature before permanent damage can ensue—a clever, kaiju-themed twist on the premise for Fantastic Voyage; and one that may intrigue fans of the body horror genre.

Gamera vs. Jiger may induce cringing for its annoying, if not thoroughly insufferable, sound effects. Especially obnoxious are the high-pitched whine of 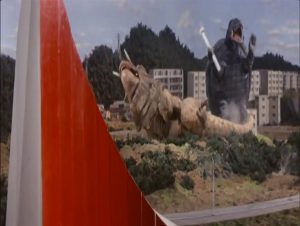 an ancient whistle; the beeping of a sonar device; and the roaring of Jiger and her offspring.

Audiences may also question how two ordinary children—apparently more intelligent and resourceful than every adult character in this film—succeed in piloting a submarine, restoring Gamera’s health, and outsmarting Jiger before she can spoil Expo ’70.

A cartoonish and poorly written kaiju offering, Gamera vs. Jiger will likely fail to captivate the majority of Japanese monster enthusiasts. Young sci-fi/horror fans may, however, enjoy this film for its campy and child-friendly atmosphere.