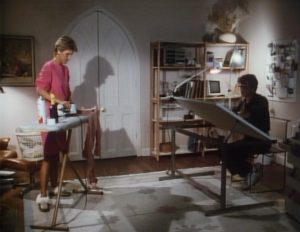 By writing requests to a mysterious milkman, artist Garry Cooley (Robert Forster) manages to solve his financial woes and cure the infertility of his wife Ruth (Shannon Wilcox). Before long, however, Garry discovers a horrifying truth about the nature of Ruth’s pregnancy.

“The Milkman Cometh” offers an implied supernatural twist on a seemingly innocuous concept. Tales from the Darkside fans will therefore enjoy this episode, dated execution notwithstanding.

Despite accepting money from a total stranger, the protagonist concerns himself only with the welfare of his wife, son, and unborn child—an aspect that compels

the viewer to sympathize with Garry, whose unethical behavior seems justified when considering the circumstances of his character.

“The Milkman Cometh” also deserves praise for its effective use of horror tropes. Specifically, the eponymous milkman—an elusive figure with malevolent intentions—conceals his true form by remaining in the shadows, avoiding human contact, and conducting his business during the wee hours of the morning, thereby establishing himself as an ominous and terrifying creature.

This episode may evoke criticism for its incongruous and repetitive musical piece, which undermines the subtlety of the milkman character.

Indicating that nothing valuable comes without a price, this offering should be commended for its thought-provoking life lesson.

Benefiting from spooky night sequences and a creepy twist ending, “The Milkman Cometh” should be requisite viewing for horror enthusiasts. Also worth noting are the topnotch performances of Robert Forster and Shannon Wilcox, who reinforce the marital struggles of both main characters.

2 thoughts on “Tales from the Darkside Episode 60: The Milkman Cometh”