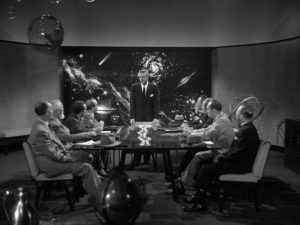 by fugitives Harry (Jack Kruschen) and Mugsy (Horace McMahon), Lester and Orville go on a series of adventures in their commandeered rocketship. 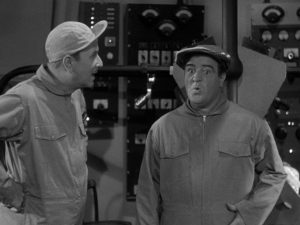 Fooling around on a rocketship, Orville activates the ignition button, flies across the country, and lands in New Orleans during a Mardi Gras celebration. Believing themselves on another planet, Lester and Orville mistake the costumed participants for hideous alien creatures—the funniest gag in the entire movie, despite dragging on much longer than necessary.

Abbott and Costello Go to Mars may evoke criticism for emphasizing two escaped convicts, one clever and the other dim-witted, instead of Bud Abbott

and Lou Costello—the titular stars of this film—for the majority of comic relief.

Also poorly executed is the final act, wherein Lester, Orville, and the two bandits arrive on Venus and discover that beautiful, Amazonian women have controlled the planet since men were banished long ago. Though potentially humorous, the Venusian subplot consumes an inordinate amount of the film’s 77-minute running time.