Freed from a giant iceberg after millions of years, a 200-foot-long praying mantis begins searching for a warm climate. While the mantis wreaks havoc on New 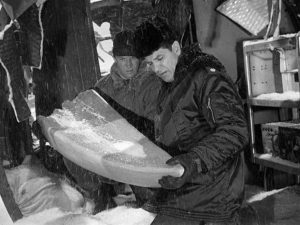 Lacking the subtle nuclear metaphor of Them! and the creepy special effects of Tarantula, The Deadly Mantis is a mediocre “big bug” feature. B-movie buffs may, of course, appreciate this film for its goofy monster action, copious stock footage, and absurd science fiction concepts. 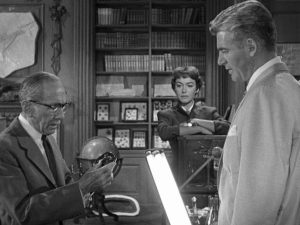 To compensate for the unconvincing nature of its title monster (actually a moving rubber prop insect similar to the giant ants from Them!), this offering builds a thick layer of suspense prior to revealing the eponymous mantis. In one chilling scene, for example, the inhabitants of an Eskimo village look into the sky, flee their huts in terror, and make a hasty escape from the island as a giant, horrifying insect lands on the shore and devours the remaining natives—a sequence that, though copied from Godzilla, establishes the mantis as a deadly, realistic threat to the characters onscreen.

Providing the viewer with a plausible-sounding explanation for the mantis’ existence, Dr. Jackson adds credibility to the premise of a gigantic, hostile praying mantis 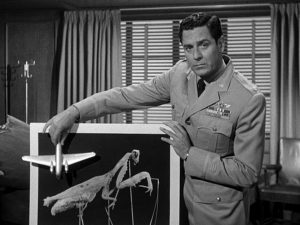 surviving into the modern age. Despite his importance to the main plot, however, Dr. Jackson fails to embody the charisma of a leading man—much in contrast to Col. Robert Calder, the protagonist played by William Hopper in 20 Million Miles to Earth.

Also worth criticizing are the characters of Marge Blaine and Col. Parkman, whose relationship comes across as sappy, contrived, and superfluous. 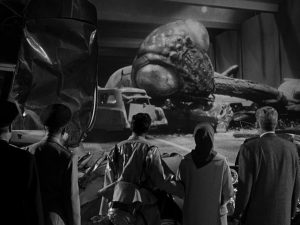 As opposed to nearly every creature feature of the 1950s, The Deadly Mantis forgoes Cold War commentary in favor of generic monster mayhem—a factor that lowers the intellectual value of this film.

The Deadly Mantis is marred by paper-thin characters, poor production values, and excessive military propaganda. Sci-fi/horror fans may nevertheless enjoy this film, which benefits from an atmospheric and riveting execution.