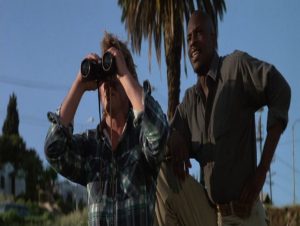 Combining alien invasion tropes with penetrating satire on consumer culture, They Live earns its status as a cult classic. Worth praising in particular is the performance of Roddy Piper, whose talent for adlibbing dialogue (e.g. “I have come here to chew bubblegum and kick ass…”) strengthens the ironic tone of this film.

Despite lacking both common sense and the ability to strategize, Nada comes across as a humble, sympathetic figure. Specifically well-written is the development of Nada’s character, whose initial belief in the American Dream, subsequent disillusionment with a society built on false premises, and eventual passion for saving the human race make him a complex and relatable protagonist.

Though condemned for its excessive length, the alleyway brawl scene deserves praise for two reasons. First, a mixture of cheesy banter, vicious blows, and choreographed 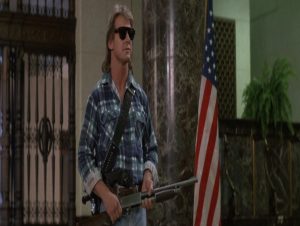 action will remind the audience of a professional wrestling match—an opportunity for Piper, one of the most iconic “villains” in WWE history, to showcase his fighting abilities in a big-budget film. Second, Nada’s grapple with Frank—in spite of its drawn-out and absurd execution—represents the struggle that many face when awakening friends, acquaintances, and family members to a corrupt and unjust system.

Blending horror, comedy, and science fiction to explore the flawed nature of civilization, They Live exposes the main agenda of many world elites: to deceive, exploit, and manipulate the working class members of society, who, based on lies and propaganda, expect progress and prosperity in exchange for copious labor.

They Live is an insightful, humorous effort by John Carpenter—director of Halloween, The Thing, and Escape from New York. Notably, this offering should be commended for its likable characters, hilarious one-liners, and riveting action sequences.