Placed in charge of a powerful computer known as Agnes, James Elwood (Wally Cox)—emboldened by his new position—begins advancing on a coworker named Millie 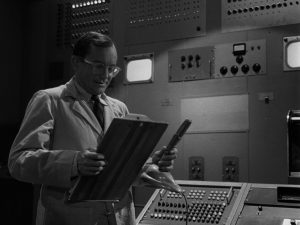 (Sue Randall). After embarrassing himself on his first date, however, Elwood seeks romantic advice from Agnes—with a predictable outcome.

“From Agnes – With Love” deserves criticism for its dated premise, oddball humor, and hackneyed romance plot. Fans of The Twilight Zone may especially wish to avoid this episode, which forgoes the penetrating insight of a typical series offering.

In spite of his annoying personality, the main character benefits from the animated performance of Wally Cox—known for providing the voice of Underdog.

Also worth praising is the concept of a sentient computer, which, though horribly executed, serves as an early example of artificial intelligence in a science fiction setting.

Despite briefly capturing the interest of an attractive coworker, Elwood decides to immerse himself in a scientific textbook, complain about his sore feet, and 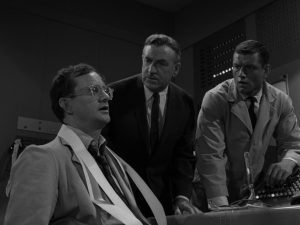 spill champagne over Millie while spending a romantic evening with her—social blunders that may prevent viewers, even those of an awkward nature, from relating to Cox’s character.

“From Agnes – With Love” is also marred by a mean-spirited ending, which offers no reward for Elwood after enduring Millie’s rejection, losing his job, and suffering a nervous breakdown.

A silly and juvenile effort, “From Agnes – With Love” may fail to captivate series enthusiasts and comedy buffs alike. Nevertheless, the acting of Cox occasionally elevates the cringe-worthy subject matter of this episode.