A Question of Fear

Malloy (Leslie Nielsen) agrees to visit the house when offered a reward of $10,000—with a ghastly outcome.

“A Question of Fear” benefits from the gravitas of Fritz Weaver (“The Obsolete Man”) and Leslie Nielsen (Forbidden Planet). Likewise, this segment deserves praise for its chilling, psychological twist on a haunted house setting.

During his stay in the haunted house, Col. Malloy encounters many spooky and well-executed horror devices: a floating head, a pendulum saw, and a ghost with flaming hands.

Nevertheless, the colonel retains his composure long enough to confront Dr. Mazi, who, while revealing his morbid intentions via television camera, convinces Malloy that a fate far worse than death soon awaits him—a clever statement on how a mere suggestion, when conveyed with harrowing conviction, can invoke terror without relying on gore, cheap thrills, or other clichéd tropes for support.

Though initially eerie, Malloy’s tour of the haunted house is marred by pacing issues, dated special effects, and illogical traps. 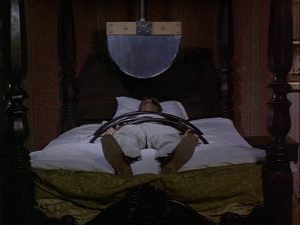 Despite using the power of imagination to paint a gruesome picture for Malloy, Dr. Mazi never corroborates his tale of a “human earthworm” with compelling evidence. Thus, viewers may question why Malloy—an intelligent, analytical, and resourceful man—would accept Mazi’s account without investigating the matter himself.

A character study with a horror twist, “A Question of Fear” explores the difference between arrogance and courage. Notably, in spite of his boastful demeanor and low tolerance for “cowards,” Col. Malloy fails to defeat a lesser man when challenged at his own game—a commentary on how brave men need not brag, posture, or belittle others in order to prove a point.

Blending creepy atmosphere with chilling exposition, “A Question of Fear” is a classic Night Gallery segment. Critical viewers may, however, take issue with this effort for its weak ending and primitive camera tricks.

The Devil Is Not Mocked

investigates the true nature of his host—supposedly the leader of a small resistance group.

“The Devil Is Not Mocked” benefits from a creepy location, an historical backdrop, and a fine performance from Francis Lederer. Also worth praising is the concept for this segment, which compares a human “monster” to one of supernatural origin.

Reprising his role from The Return of Dracula, Lederer offers an elegant and charming portrayal of the eternal count—a fitting contrast to the boorish, uncouth General von Grunn and his subordinates, who, by threatening to erase Slavic culture and enslave the Balkan people, quickly earn contempt from the audience.

Despite operating on a clever and original premise, “The Devil Is Not Mocked” suffers from a predictable ending. Especially revealing are Dracula’s cloak, accent,

and castle abode, which expose the vampire count prior to his physical transformation.

In addition to its lack of subtlety, “The Devil Is Not Mocked” fails to develop the Dracula character and General von Grunn, two interesting adversaries with great conflict potential, beyond a surface level—no doubt a consequence of the brief running time for this segment.

By pitting one evil force (Nazis) against another (vampires/werewolves), “The Devil Is Not Mocked” compels the viewer to accept Dracula—often portrayed as the least sympathetic Universal Monster—in a protagonist role.

Combining a spooky castle setting with a Nazi theme, “The Devil Is Not Mocked” will appeal to fans of Wolfenstein, Bram Stoker’s Dracula, and classic horror in general. This offering may, however, evoke criticism for its underdeveloped subject matter, which would make for an epic feature-length film.

One thought on “Night Gallery Episode 12: A Question of Fear/The Devil Is Not Mocked”