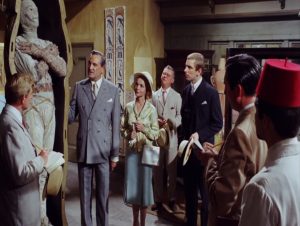 Enraged over the desecration, a local man named Hasmid (Rogert Delgado) decides to resurrect Prem as a living mummy (Eddie Powell)—with a dire outcome for the archaeological team.

Rehashing the premise from The Mummy (1959) and The Curse of the Mummy’s Tomb, The Mummy’s Shroud is an uninspired effort. Therefore, only diehard Hammer buffs will wish to view this offering, which suffers from dull pacing and derivative storytelling.

In spite of its lackluster execution, The Mummy’s Shroud benefits from several creepy moments involving Haiti (Catherine Lacey)—a cackling fortune teller whose predictions border on the uncanny—and her son Hasmid, who cooperates with

the Mummy to “punish” those responsible for desecrating an ancient burial site.

The Mummy’s Shroud may also evoke praise for giving Michael Ripper, known for his many bit parts in the early Hammer films, the chance to play a sympathetic and fully developed character—portrayed as a victim of Stanley Preston’s greed, callousness, and disregard for the consequences of invading Prem’s tomb. 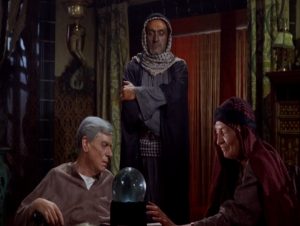 Focusing on an Egyptian mummy who returns to life and, with the help of a dedicated servant, seeks revenge on the members of a British archaeological team, The Mummy’s Shroud fails to provide a clever and original update on the first installment in Hammer’s The Mummy series. (Critical viewers may, however, prefer the ending of this film to that of the 1959 version, wherein Kharis—though supposedly invulnerable—succumbs to a hail of gunfire.)

The Mummy’s Shroud deserves recognition for its atmospheric qualities. Nevertheless, classic horror fans may choose to avoid this film for its recycled narrative and slow-moving sequences.